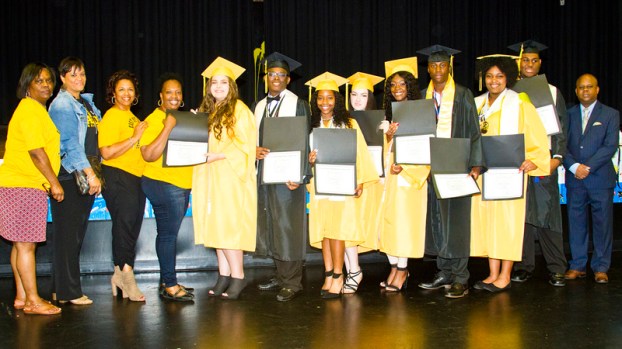 Since 2017, Wildcats alumni from across the country have convened in the fall to rekindle friendships and enthusiastically support the school that brought them together, according to Alumni Association member Melanie Burl.

Funds raised from the October 2018 event supported this year’s scholarships.

The award tradition began last year with a maximum of $1,000 given to eight students. This year, students received up to $2,500 per scholarship.

“We wanted to make the scholarships attainable to a majority of the kids,” Burl said. “Not all of them required the highest GPA. Our scholarships vary. For one, the requirement is to have participated in extracurricular activities. We’ve also had a scholarship for kids who participate in the band or any of the auxiliary units like dance team and flag team.”

While some scholarships were geared toward four-year universities, others support extended education in two-year technical or vocational colleges.

Kaylee Caronna received $1,000 to attend John Jay Beauty School. She was also accepted by Delgado Community College, and her main goal is to make her mom proud by becoming a cosmetologist and an entrepreneur.

Lewis, section leader of the baritones in band, volunteers at his church by feeding the homeless and singing in the youth choir.

He plans to major in biology at Louisiana State University and become a geneticist.

Duhe was a school leader and cheerleader active in 4-H. She volunteers as an altar server and plans to study elementary education at Southeastern Louisiana University.

Gross participated in a variety of athletic extracurriculars, including volleyball, powerlifting and track. She was a member of Beta Club and the Right Choice project and is headed to Southeastern Louisiana University to pursue nursing.

Nunnery was involved in athletic and multiple extracurriculars, including pharmacy tech club. Since becoming certified as a pharmacy technician at East St. John, he’s set a new goal to major in physical therapy at Louisiana State University-Shreveport.

Cornish pursued a health pathway at East St. John and maintained excellent grades while tutoring, working a part time job, dedicating herself to community service and performing during football and parade season.

She plans to study chemistry on a pre-pharmacy major at Xavier University of Louisiana.

Joseph, who served as cheerleading captain, also plans to study at Xavier and one day operate her own pharmacy.

Cage will study mechanical engineering and pursue his masters and PhD.

He was accepted into LSU, Vanderbilt University and Rochester Institute of Technology in New York.

Alumni Association members visited students throughout the year to inform them of scholarships.

Burl has kept up with last year’s winners, and she knows this group will be equally successful.

“Some of their stories were so interesting,” Burl said. “It was so touching. One young lady, a St. John Theatre actor, was going to Paris to pursue her passion before college. Exactly how she said it, that’s how it went.

“It was so nice to see what she said in her scholarship application unfold exactly the way she said she was going to do it.”

“We would like everyone who is participating now to encourage those who haven’t participated in the past and just keep pressing on,” Millet said.

“As the years go by, it’s growing. I, myself, am a product of East St. John. I would like to see it continued because that’s where I started out.”

A $25 membership fee for each participant is expected to raise thousands for the school.

RESERVE — Actors, singers, dancers, musicians and technicians are busily preparing for the July 19 opening night of this year’s... read more