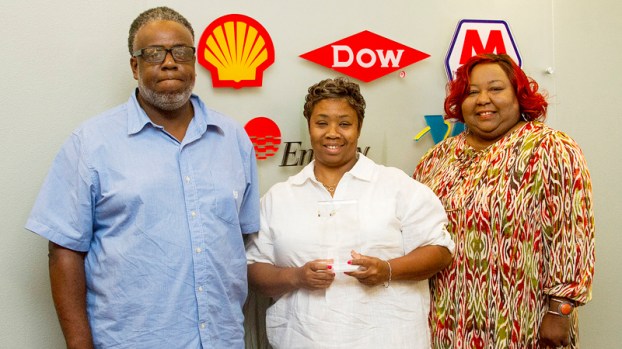 LAPLACE — When Dayna James sees packed restaurants and hotels full to capacity in Gonzales and surrounding communities, she wants the same for her hometown.

This year, James stepped into an ambassador role with the River Region Chamber of Commerce to encourage collaboration between the people and businesses of the River Parishes.

James has now been honored as Ambassador of the First Quarter, recognizing her diligence in attending events and procuring five new Chamber of Commerce members from January through April.

“This is my passion,” James said. “This is my love, to see our parishes grow, especially when you get exposed to other parishes and see them blossoming. You want that for your parish.

“I just got connected to another level. When I go out there to businesses, I’m not just representing Dana. I’m representing all of us. I look at us as a team.”

James hasn’t slowed her pace since the first quarter ended.

Dayna James, left, reacts as it’s announced she is the Ambassador of the First Quarter.

Member engagement coordinator Stacey Scott personally thanked James during Friday’s ambassador meeting for the impact she has made in the community.

“Every one that she has brought to me has walked in as a prospect, but they left out as a new member,” Scott said.

According to Grubbs, James attended two ribbon cuttings, two ambassador meetings, a Chamber Perks morning meet-up, a one-on-one orientation and other events in the first quarter, in addition to scouting out membership prospects.

James, co-owner of United Front Transportation Services LLC, is most excited about bridging the gap between the Chamber and the River Parishes Tourist Commission.

She hopes to emulate the success of monthly meetings at Houmas House in Darrow that see participation from the Chamber of Commerce in Gonzales, economic development committees, the film industry and tourism stakeholders.

“They re communicating, and it’s working because their hotels are full,” James said. “We need more communication between the people, hospitality and tourism. Our tourist commission hasn’t worked with the Chamber, so that’s the connection I’m really excited about. Buddy Boe is connecting now with the Chamber.”

James invites community members to stop inside a new restaurant or a small business to help spur economic growth.

The River Region Chamber of Commerce currently has 277 members, with plans to grow to 323 members by the end of 2019.

Grubbs said one of the pushes this year is to increase online activity through posting hot deals and job postings to riverregionchamber.org.

Members are invited to a Chamber Perks networking opportunity the morning of June 6 at PJ’s Coffee of LaPlace.

The River Region Chamber is hosting a 15-year anniversary gala from 6 to 10 p.m. June 21 at the St. John Community Center on U.S. 51 in LaPlace.

RESERVE — Actors, singers, dancers, musicians and technicians are busily preparing for the July 19 opening night of this year’s... read more