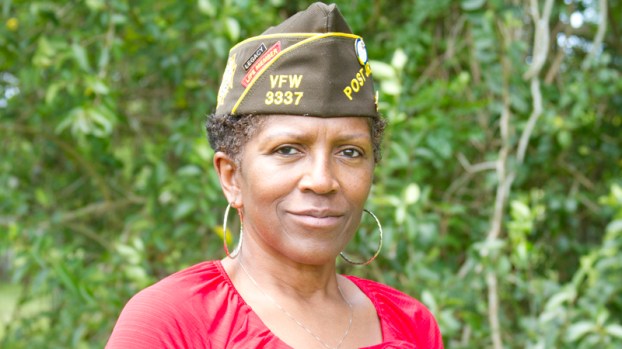 LAPLACE — Jamaine “Jamie” Smith had just graduated from business college in the 1980s when she gave her niece a ride to enlist in the United States Armed Forces, not knowing that drive would change the course of her life.

“She needed a ride to her recruiter,” Smith said. “He kind of challenged me to take a test, saying, ‘You won’t be able to pass it.’ It was like a mini ASVAB. Well, I passed it, and then they were on me, constantly, and started speaking to me about the benefits.”

Smith joined the military in 1985 to provide better security for her daughters, thinking it would be a short-lived phase of her life.

More than 30 years later, Smith is a proud veteran and the first female post commander of LaPlace VFW Post 3337.

Smith was installed in the role last week, marking a milestone in the Post’s 61-year history. Among her responsibilities to oversee operations, coordinate fundraisers and attend state conventions, Smith hopes to recruit a more diverse group of members.

“I really want to get more female veterans in, and I’m hoping I can use my platform to have them participate more and be more involved,” Smith said. “We’ll have females who come in, but they won’t stay. They won’t come to the meetings and be a part of everything we’re doing.”

While there are a handful of women in Post 3337, Smith said only three are highly involved. Among those few is new vice commander Maria Victoria Coy, who works closely with Smith.

Former post commander Ray Bass is confident in Smith’s leadership abilities and is eager to see her build a stronger Post 3337.

“I think it’s good to see a female in charge and it’s not just the good ol’ boy routine,” Bass said. “Our post, I think, is one of the best posts throughout the whole state because we’re always open to new ideas and changes to come about. It’s not just that she’s the first female post commander. It’s about how she can make the post more successful.”

According to Bass, Smith is a team player who always has the right attitude.

“I’ve been her mentor from the start, and we always told her we knew she was going to fit in this role one day,” Bass said.

Smith served nine years in active duty and five more years in the Army National Guard. She served in Desert Storm from 1990 to 1991 and moved from private to staff sergeant.

“It was preparation, training and moving,” Smith said. “We would be in one place for a day to a day-and-a-half at the most.”

The experience made her stronger and drew her closer to God.

“I don’t let things rattle me too much,” Smith said. “I don’t fear because I know everything is in His hands.”

After returning home in the 1990s, Smith began experiencing seizures. The first two were five years apart, but they grew more frequent as doctors searched for answers.

After multiple CAT scans, doctors performed an MRI and found a tumor on the left side of her brain.

Smith has recovered well since her operation in 2001, but it took a lot of fighting for her health. Since the operation impacted her mobility on the right side of her body, Smith moved with a walker, then a cane and eventually graduated to walking with a brace. She taught herself to write again and occasionally has mental blocks in using her right hand.

She still walks with a limp, but it doesn’t stop her from being an active part of her community.

Smith joined VFW Post 3337 in 2012 after seeing members make an impact locally. The VFW’s fundraising efforts are especially important to Smith because they give back to Veterans who are homeless or need a helping hand.

“I don’t want to just be the first female commander,” Smith said. “I want to be a great commander when it’s all said and done.”

Smith plans to work with students in local schools and attract younger Veterans to VFW meetings.