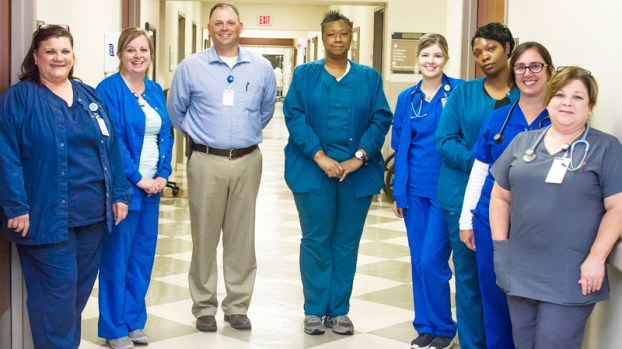 Hospital team rallies to save patient; family called in priest for final goodbye before turnaround

LUTCHER — When Roy Borne, 80, was rushed to St. James Parish Hospital last month with life-threatening sepsis on top of other ailments, his family was prepared to make funeral arrangements.

Borne’s daughter, Stephanie Collins, cancelled a Disney World vacation with her grandchild to be with him at the hospital, and a priest was called in to facilitate the family saying goodbye.

That was more than a month ago. Borne was released from the hospital on April 22 and placed back into the care of the Southeast Louisiana Veterans Home of Reserve.

“I was kind of amazed when he made it back to the home,” Collins said. “He has his good and bad days, but overall, he’s better than we expected. When he first got back, he was so alert and talking better. He was eating good, and his mind was clearer. They gave him excellent and personable care.”

Borne, a U.S. Army Veteran, has had difficulty communicating since a stroke left him with aphasia three years ago. When he came to the hospital shaking and fearful on April 16, Borne was thought to have pneumonia until tests revealed a strep throat infection had triggered sepsis.

Sepsis can rapidly lead to tissue damage, organ failure and death if not treated quickly with antibiotics and fluids, according to registered nurse Michael Gary of St. James Parish Hospital.

“Medical-wise, he had a few things going on,” Gary said. “It wasn’t just one thing making him sick. Sepsis is one of the things you have to reverse pretty quickly. If you don’t, they can cascade and keep getting worse and worse as their blood pressure starts to drop.”

Part of any treatment is keeping the patient and the family calm with reassurance, Gary said.

“If you can calm the family down, then the treatment is accepted easier and it helps heal the patient faster,” Landry said.

She said Borne’s age was the most medically challenging aspect as the medical team waited to see if he would respond to treatment.

Gary said the St. James Parish Hospital staff works together more seamlessly than any hospital he’s worked at. He started out as a radiologic technologist before making the switch to nursing 23 years ago to have a more direct connection to patients.

He serves on the board of directors for Louisiana emergency nurses and has traveled to Washington D.C. to advocate for patient care.

“Nurses see the patients 24 hours a day, and doctors rely on the nurses to pick up on those little cues and give him a call,” Gary said. “Doctors develop their plan of care based on what the nurses observe.”

Collins said the staff’s close proximity to her father aided in the recovery.

“They gave him a lot of one-on-one care,” Collins said. “They stayed with him. They didn’t give up on him because he’s an old man.”

“We’re a small community where we know a lot of people that come into our emergency room,” Holley said.

“It makes it a more personable experience for the patient and us. We’re a close-knit community and staff. For us being a smaller hospital and not having as many resources, we rely heavily on each other.”

“I think it is a calling,” Landry said. “I don’t think you can do a job like this without it being a calling.”