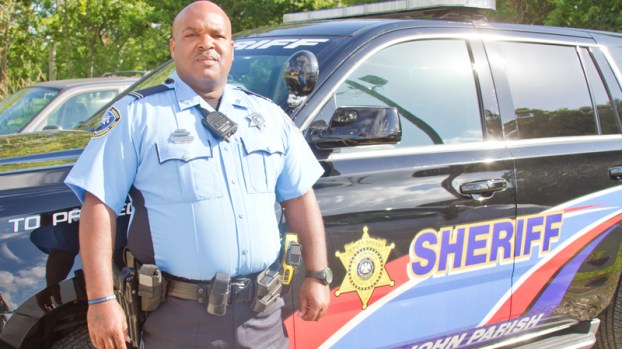 Deputy helps rescue 3 from car flipped upside down in ditch

EDGARD — Three passengers were en route to the Edgard Courthouse Jan. 30 when the driver misjudged a turn, causing the vehicle to flip into a ditch with the occupants trapped in their restraints.

Upon arriving at the crash scene in front of West St. John Elementary, Sarah located the male and female drivers.

“I asked first if everybody was OK,” Sarah said. “The male subject said he wasn’t able to move or get himself free. Upon looking at him, I noticed a female was bleeding from the hand. She had a bad laceration. He was actually almost on top of her, so I cut the restraint belt.”

Further inspection revealed an elderly male was trapped in the rear seat, conscious but not alert.

Sarah grabbed the male occupant in the passenger seat first and pulled him to safety. From there, he reached into the vehicle to pull the remaining occupants from the car.

“At that time, I was assisting the female and the fire department came,” Sarah said. “It was a quick response. I just responded to what was taking place as far as getting those people help and getting them to safety.”

One of the male passengers sustained a back injury and the female had a gash on her hand, according to Sarah. They were treated at a local hospital and released.

Pictured are Sheriff Mike Tregre, Ali Vicknair, Deputy Morris Sarah and Wayne Vicknair. The Vicknairs are co-owners of PJ’s Coffee in LaPlace, sponsor of the Officer of the First Quarter award.

The angle of the overturned vehicle added a challenge to bringing the passengers to safety.

Sarah’s fast and efficient response earned him Officer of the Quarter this month, making him eligible for 2019 Officer of the Year, according to Sheriff Mike Tregre.

Tregre said several members of St. John Sheriff’s Office recommended Sarah for the award. He described Sarah as a hard worker, dedicated and serious when it comes to his Patrol Division responsibilities.

“As a deputy, he comes to work no-nonsense and does his job,” Tregre said. “He quietly handles the business he’s sworn to do, and he’s a pretty good officer. I don’t have anything I could say bad about him.”

Sarah was surprised to receive Officer of the First Quarter. He’s enjoyed nearly 16 years with the Sheriff’s Office, where he started in corrections before moving to patrol.

While it’s nice to be recognized, Sarah said awards don’t impact the passion he and coworkers bring to the job.

Sarah began his law enforcement career in Jefferson Parish, but he yearned to become an officer long before he was employed.

“In around 1970, there was a guy named Papi,” Sarah said. “I never knew his original name, but he was a black officer who stood about 6-foot-2. His uniform was always neat. His shoes were always shiny. He was always smiling and just a wonderful person to be around.”

Sarah decided at an early age that he wanted to have that same respectable presence.

“I wanted to be in law enforcement and be in that kind of position,” Sarah said. “I want to help people who are not able to help themselves.”

Working in patrol keeps Sarah in close contact with the community as he responds to whatever situation may arise. In some cases, it’s responding to injury. Other times, he’s responded to people passing away of natural causes in their homes.

Sarah sees value in keeping in touch with the elderly. Participating in the “Protecting Our Precious Seniors” program is among his favorite responsibilities.

“We pay visits to them, sit down and talk with them and see if they need anything, whether it comes down to food or anything of that nature,” Sarah said. “I enjoy sitting down and talking with the elderly people because you gain a lot of insight as far as the neighborhood. That helps us because, at the end of the day, we are guardians of the neighborhood.”

COCODRIE — Fishing poles and summer fun have raised approximately $90,000 for fallen and injured officers throughout Louisiana since 2014,... read more