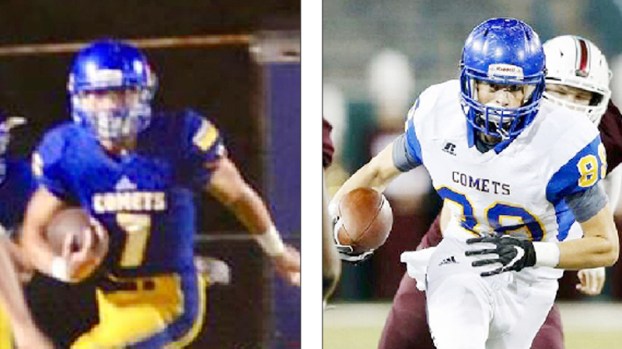 Bryce Authement, left, said he is excited for the challenge of any position in a college defensive scheme, adding he is especially looking forward to competing at deep snapper. Jacob Ganote, right, wants to make his mark at tight end.

LAPLACE — When Jacob Ganote first stepped through the doors of St. Charles Catholic High School at freshman year open house, coach Frank Monica sized him up and said, “You’re going to play football for me, son.”

Ganote had never played on a football team, not even at the recreation level. Nevertheless, Monica’s prediction rang true when Ganote developed into an offensive force at tight end.

This fall, Ganote is taking his football talent to Louisiana College.

“Louisiana College is such a small school, just like SCC,” Ganote said. “The family is there. I liked how the student body was just so close. They welcomed me, and I just think it’s the right fit for me.”

He credits his football endeavors to coach Monica, who prepared him well for the next level of competition by instilling a teamwork mentality.

“I played under one of the best coaches in Louisiana and in the nation, coach Frank Monica,” Ganote said. “He prepared me to be disciplined. One of his big things is teamwork. He made me the man I am, and that’s going to carry over to my future.”

Tough minded and determined, Ganote values dependability and vows to always be there for his teammates.

He has good hands for receiving, and he plans to bulk up in the Louisiana College weight room to make his blocking more efficient.

Ganote is eager to travel with the team and prove himself on the field, building toward an ultimate goal of standing beside his Louisiana College teammates as they claim a championship title.

Authement played one year of rec football, but he truly fell in love with the game at St. Charles Catholic.

The Comets’ “whatever it takes to win” mentality made each season more exciting, according to Authement. He’s ready to join former teammates Dellary Oubre and Lloyd Nash in a Colonels program poised for growth.

Authement is willing to play whatever defensive position coaches see fit for him. However, he yearns to become the next big deep snapper.

“I couldn’t be more excited about going to Nicholls because I feel like they have the same environment and coaching mentality that I had at SCC,” Authement said.

“It’s another brotherhood over there, and I want to be part of that again.”

Voted most athletic and best leader by his peers, Authement is a first team all district athlete who excelled in football and baseball. His favorite memory was a title game appearance in the Superdome, where he recorded 11 tackles.

He promises to keep up the hard work on the field and in the classroom, with hopes of becoming a lawyer or mechanical engineer.

“It’s something special to have to know my coaches and my family are still going to be cheering me on at the next level,” Authement said. “I really look forward to working hard in college, and the best is yet to come.”

Ganote and Authement have experienced the thrill of championship games, on the football field and in last week’s baseball title victory.

Comets baseball coach Wayne Stein praised the young men for their outstanding character and willingness to work as a team.

“Jacob Ganote was kind of a role player,” Stein said. “His attitude was ‘whatever I have to do,’ whether it was in practice or in a game to help us win. I think that’s where championships are won, not always on the field.”

When Authement struggled at bat with a back injury toward the end of the season, he showed maturity in his decision-making.

“He wasn’t able to do certain things, but he was honest because he didn’t want to hurt the team,” Stein said. “It just shows you how much of a team player he really was.”

Congratulations are in order for the St. Charles Comets State Champion Baseball team and coach Wayne Stein and his staff!... read more