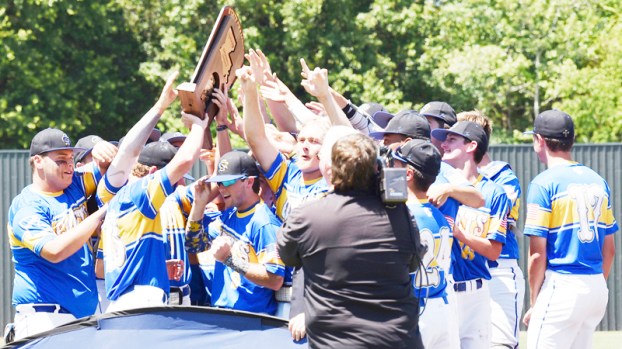 LAPLACE — To pitcher Nick Lorio, it seemed like the entire St. John the Baptist Parish family was in the stands.

“We had everybody out there – our age, younger people and older people came out there,” Lorio said. “It was like we had our own community there.”

When he helped secure the final out, teammates ran onto the field to clutch the school’s first baseball state championship trophy since St. Charles Catholic opened its doors in 1978.

The school had previously finished second in seven championship appearances.

All that changed Tuesday in Sulphur, as the No. 6 seeded Comets emerged victorious with a 7-4 win against No. 1 University High.

Generations of cheering Comets fans took the three-hour drive and witnessed history in the making.

“They said we had a curse on us and we couldn’t really pull out the gold,” Lorio said.

“It was really special to us because it was the first one for the community. It’s not our trophy. It’s the community’s trophy.”

A St. John Sheriff’s Office motorcade met the team in Gramercy on the bus ride home from Sulphur and escorted them to SCC’s athletic awards night celebration.

“They welcomed us like we were the kings of the parish,” Lorio said.

The next day felt strange for head Coach Wayne Stein, who typically uses the day after the season’s end to evaluate what went wrong.

This time around, in between congratulatory calls from past players, Stein reflected on what went right.

Stein vividly remembers the first championship game the Comets lost in 1998. He was a student, feeling invincible at the game’s start, and he sorely underestimated his opponent’s capability.

To this day, he tells his players it doesn’t matter which team has the better record; the championship belongs to whoever performs best in a single, two-hour stretch. Every title loss – five more during his time as assistant coach and one as a head coach – introduced a new lesson.

“There’s something from every single state championship that we’ve lost that I’ve taken,” Stein said. “Something I’ve done a little bit differently. The itinerary; how early we get to the park; what we did before; what we ate. At the end of the day, it’s all about the players. We had a really good group of guys; all they cared about was winning.”

Stein saw the excitement of parents who put four boys through the baseball program and finally saw their youngest hold up the gold trophy instead of the silver.

“I think we’ve got a heck of a following as a school and as an athletic program,” Stein said.

“The bulk of my congratulations came from former players who fell a little bit short, and they felt like a weight was lifted – maybe almost like a curse was lifted.”

Senior Robby Gilbert remembers what it felt like during his freshman season when the Comets fell to St. Thomas Aquinas in the championship round.

“Ever since I was a little kid, I always wanted to be in that situation, and the class that I’m graduating with really wanted that to happen for us,” Gilbert said. “We’ve practiced together since we were young, and we all were working toward the same goal, so we knew what it took to get there.”

Gilbert, named District co-MVP alongside Lorio, led his team at the plate against University High with three hits in four at-bats.

His phone and social media have been blowing up with congratulations, and he describes his team and community as an extended family.

Above all, Gilbert is proud of his team’s perseverance in a difficult sport.

“The people in the Hall of Fame only succeed three out of 10 times,” Gilbert said.

“It’s a really mental game. When you succeed at it, it’s a big accomplishment.”

Levatino loved the energy during the championship round’s third inning, when the Comets came together for a mid-game 6-0 lead.

“We knew we had a chance, but being the sixth seed, we just had to play good to win,” Levatino said. “That’s what we did. We fed off of each other in that third inning and kept just getting hits in.”

By the last inning, the title felt real and within reach as the Comets focused on hitting ground balls, limiting pop flies and forcing plays by University High.

“My body was light,” Levatino said. “It just felt amazing. After the game, I was just happy. I couldn’t get much happier than that.”

The Comets exited the historic season with a 31-8 record.

SULPHUR — The eighth championship appearance was the charm for the St. Charles Catholic baseball team Tuesday afternoon as the... read more