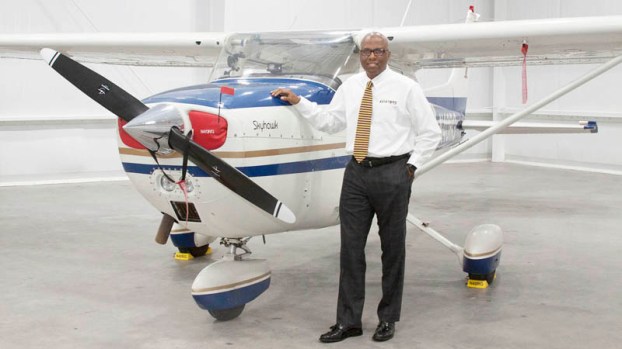 Quintin G. Wilson stands next to his plane in Reserve.

RESERVE — With a national pilot shortage looming on the horizon, Quintin G. Wilson of LaPlace said there is no time better than the present to embark on a career in aviation.

Aviation training has been in high demand by locals looking for an alternative to driving to Hammond three times a week for nighttime ground school classes, according to Wilson.

“If every flight school in America right now ran 24/7, seven days a week, we would still not be able to meet 50 percent of the demand for pilots with the shortage that’s coming,” Wilson said, adding a large percentage of the aviation workforce is approaching retirement age.

“There’s a study done by Boeing that says in the next 20 years, we’re going to need 638,000 pilots. It’s a career path that I highly recommend for anyone seeking something that’s exciting. As you’re talking about these airlines, you’re getting all these perks and benefits on top of a handsome six-figure salary.”

Wilson’s path to aviation wasn’t traditional. Growing up in Norco, he was a budding musician.

With a saxophone in hand, Wilson moved to California to pursue a smooth jazz career. He’s released three CDs with a fourth on the way and has appeared in television and film performances.

Through the success, aspirations to fly an airplane were always in the back of his mind.

His journey to becoming a licensed private pilot began in 1999 and extended cross country from California to Florida.

Wilson owns his own 1972 Cessna Skyhawk plane, and he’s ready to share the exhilaration of flight with new students of all ages.

“It’s the sense of freedom; the ability to achieve a milestone challenge and the ability to navigate an aircraft from one place to another safely,” Wilson said.

“You realize you’ve traveled all these miles away from home and you did it yourself. It’s just one of the greatest feelings in the world.”

Ground school classes are scheduled from 7 to 9 p.m. Tuesdays, Thursdays and Saturdays beginning May 28.

Additional sessions are scheduled July 9, Aug. 27, Sept. 3, Oct. 15 and Nov. 19. A $585 registration fee, which could decrease depending on the number of students enrolled, includes tax, textbooks and materials.

By the end of ground school, a student will be ready to pass the FAA Airman Knowledge testing exam and move on to flight instruction to earn a private pilot certificate.

Those interested in aviation may also take a two-hour discovery flight lesson. For $179.95, a certified instructor will accompany participants 15 and older on a 45-minute flight and give them an opportunity to pilot the airplane.

The remainder of the lesson introduces students to preflight inspection, engine starting and warm-up, takeoff, landing, climbs and descent and other maneuvers.

“The discovery flight is an inexpensive way to see if you want to invest in becoming a pilot,” Wilson said.

Port of South Louisiana officials said Southern Aviators Flight Training is a welcome addition to the Executive Regional Airport and a path to bringing greater economic growth to the River Parishes.

“We are pleased to have Southern Aviators Flight Training based at the Port of South Louisiana Executive Regional Airport and we look forward to their success,” Executive Director Paul Aucoin said.

Airport Director Vincent Caire said Wilson’s flight school fits all needs in the regional market, whether someone is learning to fly for the first time, taking their private license to the next level with an instrument rating or using aviation to tour the River Parishes.

“When it comes to regional markets, something like Southern Aviators is a fantastic solution because it’s catered to this area,” Caire said.

“You can learn at your own pace, you can do it as a hobby or you can pursue it professionally. It’s really not only an introduction to learn how to fly if you have never flown before. If you have experience, you can get a higher rating.”

For more information or to sign up for ground school, visit southernaviators.com.