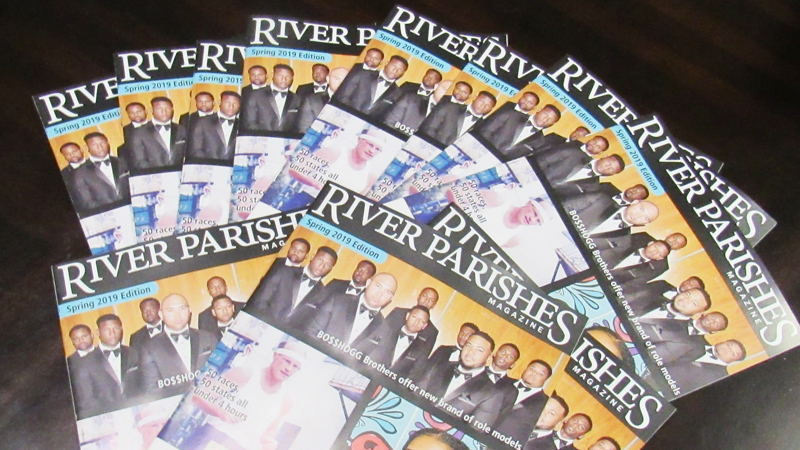 Kevin Mayho Jr. remembers spending years after failing to excel at Nicholls State University just looking for his place to thrive as an adult.

He eventually attended technical college in Reserve and became comfortable with the opportunities that education afforded him.

He still looks back with some regret at the lost time after his high school graduation. However, it’s not his own staggered start that worries him, but something similar that could happen to a younger generation of teenagers in the River Region.

“That’s what I don’t want, for these younger kids to feel like they are wasting time in what they’re doing,” Mayho recently told L’OBSERVATEUR news editor Brooke Robichaux. “Time is the most valuable thing. You can’t get that back. I want kids to be successful right ahead instead of thinking about what could have been.”

Robichaux interviewed Mayho for the current edition of River Parishes Magazine, focusing on Mayho’s work with BO$$HOGG Brothers, a group of young business professionals who have dedicated the last three years to awarding scholarships, volunteering at educational functions, mentoring the youth and giving back to the community with food and school supply donations.

The anagram stands for “Built on Self-Success, Helping Our Generation Grow,” and Mayho is one of many in the group making a difference in the lives of students in St. James Parish and beyond.

Those who pick up the new River Parishes Magazine will enjoy a profile on the BO$$HOGG Brothers, as well as many other local features highlighting the cool and unique people who make our community standout between New Orleans and Baton Rouge.

• Kenneth Massett of LaPlace ran his first marathon in February 2004 at age 47.

He finished with everything from his stomach to his toes torturing him. He also didn’t stop.

In just a few years he earned entrance into the prestigious 50Sub4 Club, open only to marathon runners who finished tracks in less than four hours in all 50 states.

His story is amazing.

• There is not a horizon that Quintin G. Wilson (aka Quintin Gerard W.) can’t imagine flying through.

He just doesn’t understand why more young and old don’t have the same sense of adventure.

He’s out to change that, filling a much-needed void by opening Southern Aviators Flight Training at Port of South Louisiana Executive Regional Airport in Reserve.

It was established in March and provides quality flight training services to the River Parishes and greater Southern Louisiana by servicing students who want to learn to fly or advance their aviation ratings and careers.

• Even as a first grader, Asia Scioneaux stood out among classmates in her self-assured, respectful demeanor and attention to detail.

Now an eighth grade honor student, she is upholding her family’s tradition of excellence by pursuing a pre-engineering pathway at the St. John the Baptist Parish STEM Magnet program.

In addition to being recognized as a UnitedHealthcare Challenge winner, Asia has prepared for a career in engineering by delving into robotics. She accompanied her team to a state championship, where she helped earn a first place win in the problems and solutions category.

These stories and more are just a small dose of what makes our community special. Be sure to check them out in the latest edition of River Parishes Magazine, available across the community or at L’OBSERVATEUR’s office in LaPlace.

Stephen Hemelt is publisher of L’OBSERVATEUR. He can be reached at stephen.hemelt@lobservateur.com or 985-652-9545.