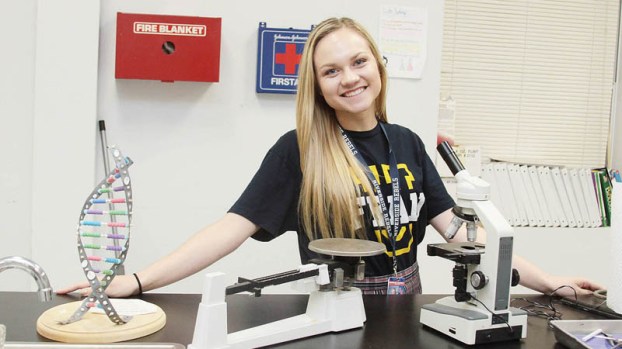 Tabitha Tregre charts career in radiation therapy to help those with cancer, other diseases

RESERVE — Once Riverside Academy senior Tabitha Tregre sets a goal, nothing can stop her from achieving it.

Years of prioritizing a future in the medical field will culminate this fall when she steps onto the Franciscan Missionaries of Our Lady University campus with 27 college credit hours already under her belt.

“I want to go for radiologic technology, and I plan on getting my degree there and later going to school for radiation therapy to help people with cancer and other diseases that can be treated with that,” Tabitha said.

Tabitha realized a passion for the medical field at a young age. Within the field of radiology, she’s interested in a path that allows for close and compassionate interaction with patients.

“Cancer is closer to my heart because my grandmother is a survivor from breast cancer,” Tabitha said. “My aunt just finished chemo a few months ago, and my cousin died when she was around 2 from leukemia.”

Tabitha, a competition dancer with more than 13 years experience at Dance Etc., surprised her peers by declining a position on Riverside’s dance team in favor of assisting students as an athletic trainer.

Starting in her freshman year, Tabitha worked with the head athletic trainer to treat injuries, prep the football field and keep the team healthy and hydrated.

Tabitha continued her dance career outside of school and finished her final classes in 2018.

She remains actively involved on the Riverside Academy campus through participation in almost every club offered.

She’s a member of senior Beta Club and Mu Alpha Theta, where she serves as secretary/treasurer and puts her math skills to the test.

While she holds an interest in STEM, Tabitha considers history her favorite subject, and she’s always had an affinity for art.

She enjoys drawing with pencil or charcoal and painting with acrylic in her spare time.

French teacher Coy Boé has taught Tabitha for four years, and he said her positive energy and work ethic make her unique.

“It’s been a great privilege for me because she has always been a hardworking young lady, energetic and very enthusiastic about learning,” Boé said. “She’s just been a joy to have in the classroom, and she will be greatly missed. She’s always willing to help others. She has a very giving and sweet spirit about her.”

Tabitha is the public relations director in charge of documenting student life for Student Council, and she enthusiastically took part in organizing Riverside Academy’s field day.

She was in drama club for a year and was one of the first to join the political science club.

Tabitha proved she’s both beauty and brains in the pageant world, where she won Teen Andouille Queen in 2015.

“It’s hard to balance everything, but I try to have a nice balance,” Tabitha said. “I would describe myself as determined. When somebody tells me I can’t do something, I try my hardest to prove them wrong. When I have my goals set, I work extremely hard and I feel like there’s nothing that can get in my way.”

Tabitha is also involved at St. Peter Catholic Church and has served as a lector during Mass.

Tabitha is the daughter of Kirt and Tricia Tregre of Reserve.