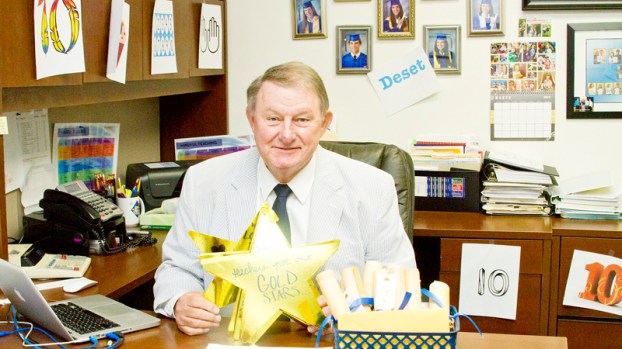 Retiring St. Charles Catholic principal Andrew Cupit shows off some of the gifts and tributes presented to him by students and colleagues.

The school became an integral part of the family when Cupit became principal in 1989, making it all the harder to say goodbye after 30 years.

In celebration of Cupit’s retirement, effective next month, St. Charles Catholic students, faculty and staff have initiated 30 days of surprises.

On the last day of school before Easter, Cupit found 30 gold brick eggs, signifying his favorite candy. His favorite number, 10, was taped along the walls of his office in 30 different ways.

Cupit received 30 scripture readings of Deuteronomy 10:10 Monday morning, just before the entire school headed to the Comets gym for a Mass of Thanksgiving in his honor.

Of all his contributions, Cupit said the most important was forming a mission statement that guides students to an eternity in Heaven and encourages them to use their talents to glorify God.

“It’s a small enough school where you get to know all the students, the teachers and the families, but at the same time, it provides numerous opportunities for students to grow spiritually, academically and in extracurricular activities,” Cupit said. “I love the atmosphere we have here. It’s a faith community. The first title on the job description is spiritual leader, and I have taken that responsibility on with pleasure and commitment.”

“Mr. Cupit has been an incredible principal at St. Charles Catholic High School,” Millet said. “He showed that you can make a positive difference in so many lives — those of students, teachers and parents.”

Drew Cupit stands by the SCC mission statement, which he helped craft.

Born and raised in LaPlace, Cupit grew up with a Catholic education from St. Peter School in Reserve and Jesuit in New Orleans.

After obtaining an undergraduate degree in math and a master’s in administration, Cupit began a 20-year career in public school education in St. John the Baptist Parish.

He started teaching at Reserve Junior High in 1969 and transferred to Leon Godchaux High School in the 1970s.

Cupit was promoted to assistant principal at East St. John High School in 1980. He was principal at LaPlace Elementary from 1987 to 1989, until he received an offer from St. Charles Catholic.

“I went to Catholic schools through high school, and it was an opportunity for me to practice my faith and my profession at the same place,” Cupit said.

Douglas Triche worked with Cupit for 20 years at St. Charles. As new principal at Pope John Paul II, he often asks himself, “What Would Drew Do?”

“He is a leader who is very loyal to his people and will do the most he can to make good decisions,” Triche said. “He relates well to people.”

Meredith Keating, class of 2013, returned to St. Charles for the ceremony Monday to recognize Cupit’s impact on her family.

Friends and family take the front row during Monday’s Mass.

“He was principal for me, my brother and my sister now, and we’ve been knowing the family forever, so all of us coming through St. Charles makes it extra special,” Keating said. “It’s nice to have that family feel, so I definitely wanted to come back and tell him ‘thank you’ for everything he did for my family and for everybody else.”

In his retirement, Cupit plans to spend time with his 12 grandchildren and welcome two more on the way.

With a family spread across the country, a lot of travel lies in his future. He plans to cultivate new hobbies while staying active in his community.

Cupit thanks his immediate family and extended St. Charles family for decades of support.

“I’m really fortunate to have a profession that I really love, so it’s really hard to give it up,” Cupit said.

“I would like to thank my family for allowing me the privilege of working here, especially my wife and children. It’s a job that requires a lot of time, but they all understood and allowed me to do what I love to do.”

LAPLACE — Jayson Williams Jr. of LaPlace, only 7 years old, displayed quick and selfless instincts on Saturday when he... read more