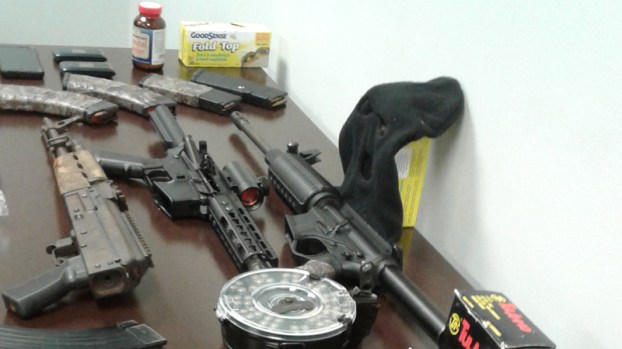 LAPLACE — Dawn was still a few hours away as S.W.A.T. officers approached a home on Cambridge Drive in LaPlace.

It was almost 2 a.m. Friday, and the officers knew the home likely contained weapons, drugs and more than one person capable of violent acts, police later said.

The first noise anyone heard was the BOOM, as St. John Sheriff’s Office personnel breached the home’s front door.

The LaPlace man and convicted felon reacted instinctively, jumping to the floor and lying on his stomach. Police said he didn’t move at first, waiting to respond until police had fully identified themselves.

He was wearing a beanie, one that when stretched out revealed itself to be a ski mask, complete with just openings for two eyes and a mouth.

Another man was in the house during the raid, police said — Devonte Johnson. The 25-year-old Garyville resident was in a middle bedroom, and he tried to escape through a window.

That’s where he met S.W.A.T. officers, according to Mangano, who said Johnson retreated back inside and surrendered peacefully.

Sheriff Mike Tregre doubled down on the assertion, noting the trio’s names have popped up in numerous local homicide investigations dating back years.

Lee Sr., who was not home during the police raid, was arrested a few hours later while approaching the home.

“Nobody was injured on both sides,” Mangano said. “They ended up surrendering peacefully. All my guys went home safe. It is the absolute best outcome. We trained for it.”

Following the arrests, police noted Lee Jr. was in the living room area where three firearms were within arm’s reach. Mangano noted the guns were “locked, loaded and ready to go.”

Through the course of their search, detectives recovered an AK-47, two AR-15s and two handguns.

Police said one of the handguns has already been linked to a batch of stolen weapons from a Thibodaux gun store, and they believe further examination and investigation will more than likely link the other firearms to shootings in and around St. John the Baptist Parish.

Mangano described the drug tools on scene linking the suspects as “100 percent sellers.”

Tregre noted the seized narcotics were not for personal consumption.

“Those are distributers right there and willing to protect themselves at all costs,” he said.

Police began their case in April after receiving word that Lee Jr. was moving in and around LaPlace.

A suspect in multiple violent crimes throughout St. John, police said their last official contact with Lee Jr. was some time ago when, set for trial on drug charges, he abruptly fired his lawyer and never showed back up to court.

His parole violation and contempt of court violations mounted, putting him squarely in the forefront of police attention.

Mangano said it was learned Lee Jr. might be frequenting a home in the 1500 block of Cambridge Drive, where his father resided.

“Had we not done our due diligence, not opened up our investigation and just decided to arrest him on his contempt of court and parole violation, he would be back out on the streets and all this would still be with him,” Mangano said. “He has refused to show up for court for over two years now. The court system will hopefully take that into consideration.”

Police said one of the guns found is stolen from Thibodaux.

“Their names have surfaced for years in St. John Parish,” he said. “The investigation is still very active. If the people we know would just have the courage to tell us a little bit more, then we could probably solve a number of crimes in St. John Parish. The community helped us tremendously to track these guys down. We just need some more help.

“This is just one phase of many. This will not stop. We’re not going to take a day off. We’re going to continue. My team is very well trained and prepped.”

Police said the suspects are believed to be drug dealers.

He is charged with more than a dozen drug and gun crimes.

Johnson is charged with ten drug and gun felonies relating to the investigation.

Police said he has been arrested more than 10 times since 2012 in St. John Parish and was transferred to the Catahoula Correctional Center.

Police said he has been arrested more than 20 times since 2006 in St. John Parish.