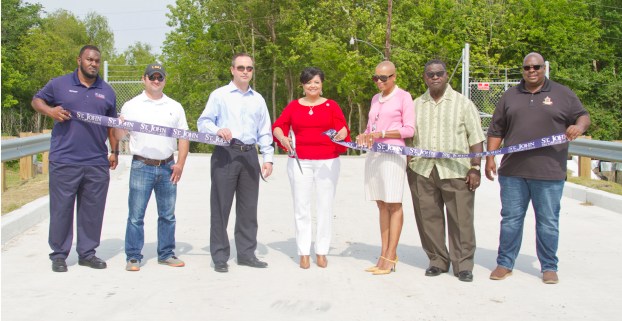 Capital projects administrator Derron Cooper described the necessity of the Woodland Bridge repairs at a ribbon cutting held last week at the site.

“After a period of time, the elevation drops, and what we were having was the approach slabs on the East and West sides of the bridge beginning to sink,” Cooper said, noting the bridge is used mainly for employee access and commercial deliveries to the sewer treatment plant.

Rotting timber pilings were removed and replaced under the bridge, which also features a repaired fence and swing gate.

While the Woodland Drive Bridge is not a high traffic area, Robottom said the safety of the employees who travel back and forth over the canal is paramount.

Furthermore, disrupted access to the sewage plant could have environmental and public health implications if wastewater is not properly treated.

She commended Principal Engineering for working quickly and keeping the total project cost at $240,905, coming in under the $300,000 budget.

“We had assessments from project administrators, DOTD, external consultants and everybody made assessments that the (four) bridges were in need of repair,” Robottom said. “Over time, these bridge repairs were funded through bond issues, and the money went exactly where the voters intended for it to go.”

When the Fairway Drive Bridge was found to have more extensive damage, there was some concern the money wouldn’t stretch to fund the Woodland repair, according to Robottom. Fortunately, those fears did not become a reality.

“You can’t put a price on safety, so it was important that we identified the funds to fix these bridges,” Robottom said. “It is out of sight, but it’s important.”

Principal engineering president Henry DiFranco said it was a pleasure to oversee the bridge repairs.

“St. John is near and dear to my heart because I have history here,” DiFranco said. “It feels good to be the former public works utilities director and still do infrastructure here.”