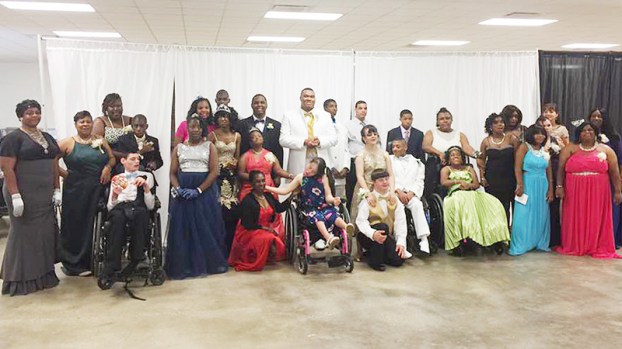 Attendees of East St. John High’s inaugural prom social in 2017 pose for a picture. The 2019 event is Saturday.

RESERVE — Two years have passed since former East St. John High School student Gabe Landry jumped out of a decorated box in the cafeteria and asked his girlfriend to the inaugural Special Education Prom.

Caught on camera, the sweet gesture quickly went viral, and Special Education Prom co-organizer Melissa Johnson Robinson said it was one of many heartfelt moments the event has evoked.

She commends regular education students who go above and beyond to make the night memorable for their special education friends, either by volunteering at the prom or accompanying students as dates.

The East St. John homecoming king and queen crown the special education king and queen at the event, which draws participation from parents, brothers, sisters and friends.

With special education professionals on hand to supervise students, parents can alternatively enjoy a date night out.

“There are so many people that come together and work with us in order for us to make this night amazing,” Robinson said. “It’s not even just the big supporters. It’s the neighbor down the street; single people that are willing to do something. When they know it’s for our population, they open up their hearts. It’s amazing.”

Celeste Rebstock shows off her dress at last year’s prom.

“Three years ago, we decided to do something where the kids can have that same experience but around something familiar and people they know,” Williams said. “We’re trying to do things that we’re familiar with because they need a lot of routine and consistency.”

Special education students show up in dresses, tuxedos or their Sunday best and enjoy an on-site DJ who plays music at a lower volume.

The lights are dimmed just enough, and the special education teachers know which foods and smells students can tolerate.

Gabe, who graduated last year, is returning to bring his girlfriend to the prom once more.

Alexis Duhe, Rhyshique Williams and Gabe Landry are shown at the Prom in 2017.

The socialization aspect is there in the form of regular education volunteers and dates, Williams said.

The Special Education prom is affordable, only $10 for students and $5 for their dates.

Proceeds pay for the prom, along with community donations and sponsorships. Any remaining funds go directly to future events such as an end-of-year picnic celebration or a back-to-school bash. Donations can be directed to the East St. John alternate assessment program at 1 Wildcat Drive in Reserve.

RESERVE — The St. John the Baptist Parish School Board is scheduled to meet Thursday evening in Reserve. One thing... read more