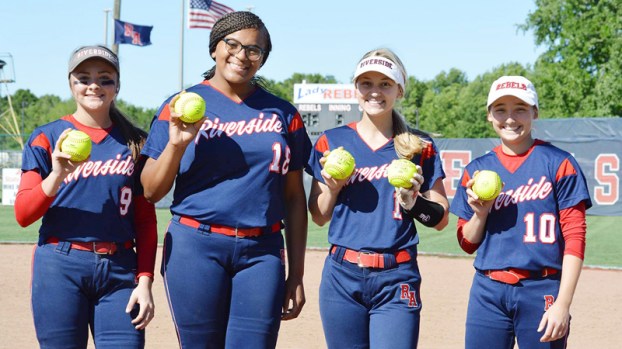 RESERVE — Five home runs during a Saturday quarterfinal playoff game against Catholic High – New Iberia earned the Riverside Academy softball team a 19-13 win and a ticket back to Sulphur.

Pitted against No. 1 seed Notre Dame in a 1:30 p.m. Friday semifinal blitz, the No. 4 Lady Rebels must bring a flawless offensive and defensive performance to advance to Saturday’s Division III state championship.

If successful, Riverside Academy would play for the state title at 1:30 p.m. Saturday against the winner of Friday’s meeting of No. 3 Holy Savior Menard and No. 2 Calvary Baptist.

Last month’s face-off against Notre Dame ended in a 0-14 loss, representing Riverside Academy’s only non-scoring game of the season.

The Lady Pios, an undefeated veteran club two wins shy of a perfect season, have thrown 19 shutout wins in 30 games.

“Based off of what we know about them and what happened last time, they can hit 1 through 9 in the gaps. They’re all around pretty solid, and pitching has a lot to do with that. They have a pitcher that gets up there and can strike out a lot of kids.”

Hitting was at a deficit during Riverside’s last encounter with Notre Dame in the Lutcher tournament, Regalo said.

However, the Lady Rebels were hot at the plate Saturday against Catholic High – New Iberia, making up for defensive errors with home runs.

Lady Rebels freshman Alonah Felton was hit by a pitch in the bottom of the first inning to load the bases, and a single by Ashley Hymel drove in the first run of the game.

It was followed by senior Kate St. Pierre’s grand slam to push Riverside Academy to an early 5-0 lead.

While the Lady Rebels never gave up that lead, New Iberia trailed closely with their own power plays and blunders.

“It was back and forth inning to inning,” Regalo said. “We would score, they would score. We made too many errors defensively. Luckily, we never let our foot off of the gas when it came to offense.”

Ava Fernandez gets ready to let a pitch go during playoff action. (Photo by Rebecca Simon)

St. Pierre followed up her grand slam with a two-run homer to knock in six runs to the final score.

Though many of the girls have played in Sulphur, Regalo feels like she’s bringing a new team to the semifinals.

“We’re stronger through the lineup, one through nine,” Regalo said. “We’ve grown on the mound. When we play good defense like I know they can, we’re an even stronger defensive team than last year.”