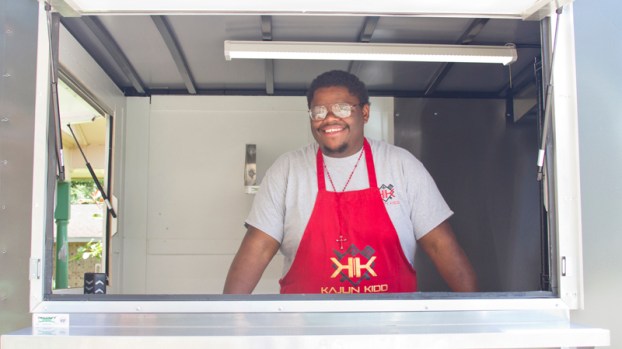 LaPlace chef and entrepreneur Cardell Smith stands inside of his Kajun Kidd food trailer, which he recently launched to serve up delectable delights.

LAPLACE — After working as a chef for luxurious Ritz-Carlton hotels in New Orleans and Atlanta and as a sous chef for the University of Alabama, Cardell Smith of LaPlace yearned to return home and grow his own business.

That’s exactly what he’s doing from the window of a traveling food trailer.

The gray trailer parked outside of 1520 Belle Pointe Blvd. is compact in size, but it packs a lot of flavor.

Inside, Smith operates Kajun Kidd Burgers and Wings to bring freshly made lunch, dinner and dessert options to St. John the Baptist Parish.

“It’s a restaurant experience with restaurant style quality, just out of a food trailer,” Smith said.

Smith, who was featured on a 2017 episode of Food Network’s Cooks vs. Cons, loves the versatility of the food trailer. When he’s not parked in front of his LaPlace home, Smith brings his cuisine to New Orleans, Baton Rouge and Labadieville.

“I thought a food trailer was the way to go, so I took a leap of faith,” Smith said. “I like being able to travel and move around with the food so I can let everybody in the little towns get a taste of my food,” Smith said.

The “Young Money” burger and sweet heat wings are among the most popular items, according to Smith.

Menu items are made fresh each day, according to Smith.

“We cater to every audience, and we always have a culinary twist,” Smith said. “We have things like pasta and wings on one plate instead of just having wings with regular fries. We bring the whole culinary experience and have different spins on our wings and burgers.”

Smith’s parents, Paul and Carmen Smith, and nieces, Yasmin and Racquel Williams, played an integral role in getting the business started.

Yasmin learned a lot about cleaning chicken and prepping burgers, though she generally works at the window and interacts with customers.

“I saw how hard my uncle was trying, and I saw he was really driven to get his own food business,” Yasmin said. “I thought, why not help him out?”

Cardell Smith works from inside the Kajun Kidd trailer.

Feedback has been positive, according to Yasmin, who described Smith’s food as “amazing” and “untouchable.”

“The customers say it’s the best; that they’ve never had anything like it,” Yasmin said. “They see his dedication. A lot of the customers love to support. Every time he opens up, it’s like he has the same customers that come every single time and buy the same thing. It’s slowly blowing up.”

Smith has culinary experience as a vendor at Essence Festival, the Bayou Classic and Xavier University, among other locations. He plans to continue growing his food trailer and eventually open a LaPlace storefront.

The food trailer’s location scheduling is announced in advance on the Kajun Kidd Burgers and Wings Facebook and Instagram pages.

Kajun Kidd will serve meals from 1520 Belle Pointe Blvd. from noon to 9 p.m. Wednesday through Saturday.

RESERVE — The St. John the Baptist Parish School Board is scheduled to meet Thursday evening in Reserve. One thing... read more