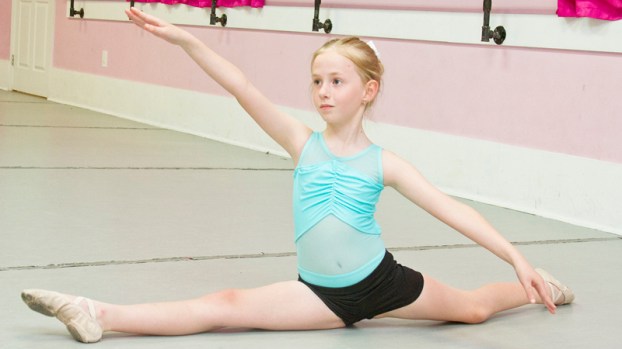 LAPLACE — Sara-Rachelle Robinson of LaPlace earned the nickname “Tiny Dancer” as a toddler. With a natural ballet stance that made baby steps look graceful, she seemed to float from place to place rather than walk.

Diagnosed with autism spectrum disorder, Sara-Rachelle has to work harder and train longer than her neurotypical classmates to master new moves and techniques. Practice can take six days per week.

Brandi Robinson tells her daughter autism makes her different, not less. Sara-Rachelle simply operates on a different playing field, as autism impacts every area of her life from her dance recall and muscle tone to how she experiences the world through her five senses.

“We try to educate people that you can’t separate the autism from who she is, and we try to get her to understand it’s never a negative thing,” Brandi said.

Sara-Rachelle augments Monday, Tuesday, Thursday, Friday and Saturday dance classes with daily at-home workouts. Unless it’s a holiday, she can be found training with her ballet bar, resistance bands, strap-on weights and a tool to straighten her legs and toe point.

Family, friends and supporters show off their autism awareness during a recent dance competition.

Her favorite dance this year is a lyrical solo with a slow tempo reminiscent of ballet.

“A lyrical dance is slower than the jazz dance,” Sara-Rachelle said. “It’s slower and not as sharp. Everything is like a river. You flow through it.”

Sara-Rachelle described herself as a “technique person” who enjoys the intricacies of ballet.

In her solo routine, appropriately titled “Tiny Dancer,” Sara-Rachelle wears a specially made costume shipped from a family friend in Oregon to meet her sensory needs.

Costumes that feel normal to the average dancer feel unbearably itchy to Sara-Rachelle, making it nearly impossible to focus on stage without a costume as smooth as silk.

When she prepares for bed at night after receiving puppy kisses from her emotional support dog, she uses a weighted blanket to fall asleep and an eye mask to block out all light.

Sometimes lying in a comfy bed still feels like sleeping “on a rock,” according to Sara-Rachelle.

Autism makes it difficult for Sara-Rachelle to vocalize when she’s feeling hungry or thirsty, and she’s working on self-advocacy skills with her therapist.

Teachers at Aimee’s Dance Academy have a wonderful relationship with Sara-Rachelle and can always tell when she’s on the verge of hitting a wall or a roadblock, according to Brandi.

Other times, autism works to her advantage in dance.

“She’s really good at ballet because of her autism,” Brandi said. “She’s very black and white. She’s got an amazing recall, so she’s able to form her body into what needs to be there. She’s pretty much a ballet dictionary with the terms.”

Though Sara-Rachelle has issues with crowded spaces, she’s able to perform without a problem on the competition stage.

Her love for dance is so strong, her mother has an autism puzzle piece tattoo overlaid with ballet shoes to signify her tiny dancer.

Sara-Rachelle’s competition performances have earned her invites to national competitions, and she was accepted into the Joffrey Ballet School Summer Intensive in Dallas.

She’s an all-A honor roll student learning French as a second language, and she has dreams to be a professional prima ballerina, front and center.

Sara-Rachelle uses costumes as smooth as silk because those that feel normal to some dancers feel unbearably itchy to her.

LAPLACE —These kinds of crimes aren’t stopping anytime soon, according to Sheriff Mike Tregre, who is referencing this month’s arrest... read more