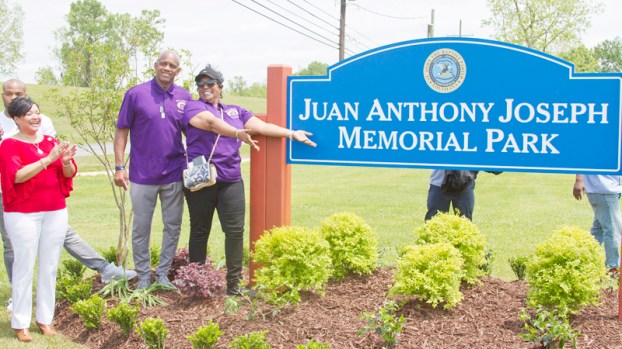 Greg and Elizabeth Robiskie Joseph stand by the memorial park named in honor of their son, Juan.

A crowd of at least 150 gathered to unveil signage bearing the names of the late Juan Anthony Joseph, killed by gunfire in 2014 while attempting to deescalate a verbal altercation, and two 11-year-old cousins who lost their lives in an ATV accident on July 15, 2003.

The De’Vante Michael Smith Memorial Baseball Fields and Raeaneka Lanae Small Memorial Airnasium continue the legacy of the spirited children known for their love of athletics and dedication to helping those in need.

Family members of the deceased sat front and center during Wednesday’s West Bank park dedications, which attracted a massive crowd of friends and supporters.

Greg Joseph made it known signage is only one step toward a continued legacy.

“We’re going to do what we’re supposed to do here,” Joseph said. “I promise you, we will play baseball. We will have sports activities here.”

His wife, Elizabeth Robiskie Joseph, said the unveiling was bittersweet.

“It would be a lot nicer to be standing here if Juan was standing there with us, but I know his spirit is with us,” Elizabeth said. “He gave up his life caring for others. Twenty-seven years was all I had with him, but I thank God for those 27 years.”

Juan is survived by his wife, Kala Esco, and their two daughters, Ari-ya Nevah, 6, and Nyla Nauj, 3.

Their youngest daughter was unborn at the time of his death.

Juan played football, basketball and baseball while earning a 4.1 GPA and went on to earn his bachelors and masters degrees from Millsaps College in Jackson, Miss. At Millsaps, he was a standout quarterback named Southern Collegiate Athletic Conference Player of the Year three years in a row.

In 2008, he won the prestigious Conerly Trophy as the top college player in Mississippi. He was posthumously inducted into the Millsaps Hall of Fame in October 2018. Juan’s family and friends described him as a fun-loving individual who gave back by coaching the next generation of West St. John High students.

Lennix Madere speaks in honor of those gone too soon just before the unveilings at the Juan Anthony Joseph Memorial Park.

West St. John baseball team members who didn’t have the opportunity to have Juan as a coach saw his influence in older students’ drive for greatness.

Councilman Lennix Madere Jr. knew Juan from the time he was a young child playing baseball.

“When I heard what had happened, I knew Juan didn’t do anything wrong,” Madere said. “That’s not the type of individual he was.”

Madere said De’Vante and Raeaneka embodied the same qualities seen in Juan and among the people of the West Bank.

De’Vante Michael Smith, son of former councilman Arthur and Cheryl Smith, was born on July 2, 1992. He attended West St. John Elementary and was an incoming sixth grader at Ascension of our Lord Elementary.

De’Vante was an avid athlete who played baseball, football and basketball and loved spending time with family and friends.

Family members said De’Vante left an “unforgettable” impact on everyone he came into contact with, adding he will always be remembered for his “unique personality and his desire to help those in need.”

De’Vante’s mother was teary-eyed at the unveiling, wishing her son was here to see his name designating the sport he so loved.

The family stuck together for the dedication of the Raeaneka Lanae Small Airnasium, celebrating the life of a loving, caring, outgoing and outspoken girl.

She found faith in God and a true passion for life at an early age, according to family members.

Jones recalls Raeaneka trying to drive a car at 8 years old and being the youngest hunter on a trip to Mississippi. She enjoyed football, baseball, basketball and running, and she had a special relationship to her cousin De’Vante, her protector.

Numerous family members dressed in white turned out for the Harold Scott Roussel Sr. dedication on Castle Drive, remembering him as a well-researched man, who was influential throughout the West Bank.

Roussel served on the Civil Service Board, became the first black poll commissioner in St. John the Baptist Parish and wrote his own grant to secure funding to begin a summer feeding program in the 1960s.

He would constantly write to local and state officials in the most beautiful calligraphy. Any time someone saw his handwriting; they knew it contained suggestions to better the community.

Family members recall Roussel driving a school bus and putting the first lights on the West St. John Rams stadium. He led the baseball team to its first state championship win in 1953.

Community member Gary Watson will never forget the way Roussel participated in protests, evidence that he always stood up for the school system.

The playground on Castle Drive, located behind the Edgard Library, is named after community organizer Harold J. “Scott” Roussel Sr.

Another friend of Roussel’s remembers always seeing him at the library.

“He researched everything before he made his comments,” she said. “He wanted to be 100 percent accurate in what he was writing. He would definitely be able to challenge somebody when they came back with an answer.”

LAPLACE — Sara-Rachelle Robinson of LaPlace earned the nickname “Tiny Dancer” as a toddler. With a natural ballet stance that... read more