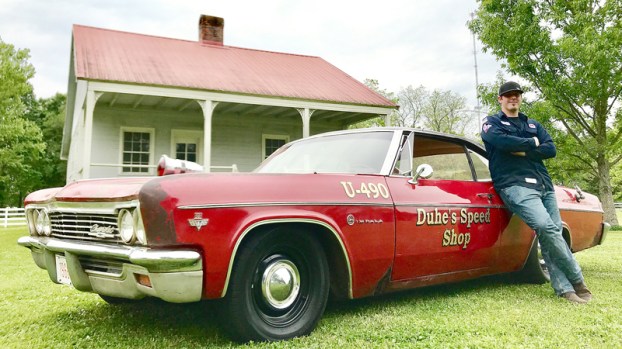 Jacob Duhe stands next to a ’66 Chevy Impala remodeled to look like a classic fire chief’s car.

GARYVILLE — Sgt. Faron Duhe of Garyville knew his son would grow up to be mechanically inclined from the time he started disassembling his toys.

By age 4, Jacob Duhe learned to pull doors off of their hinges. Antics that got him chastised as a child developed into mechanical talent and a passion for working on classic cars.

The weathered ’66 Chevy Impala Jacob purchased months ago is nearly unrecognizable today, and it will be a standout this summer on back roads from North Carolina to Ohio in the 25th Anniversary 2019 Hot Rod Power Tour.

Held from June 8-14, the Hot Rod tour kicks off in Concord, N.C., and meanders through Virginia, Eastern Tennessee and Indiana before finishing at Summit Motorsports Park in Norwalk, Ohio.

Jacob and Faron will be participating for the first time, having only experienced the Hot Rod atmosphere once before when drivers stopped in Gonzales in 2016.

Equipped with a new frame, a modernized 2004 engine from a Cadillac Escalade and a turbo charger, Jacob’s Impala is ready for the long haul.

When the red Impala was first shipped to Louisiana from a buyer in Minnesota, it was beaten and worn, according to Jacob.

He looked at the vehicle and reimagined it as an old fire chief’s car.

“Seeing as my dad was the fire chief for 30 years and I was in the fire department for six years, it kind of made me like vintage fire memorabilia,” Jacob said.

“I put a big siren on the fender. It doesn’t say fire because I didn’t want (to violate) any stipulations, so I put ‘Duhe’s Speed Shop’ and ‘Unit 490’ on the side in gold leaf like how a fire truck would have.”

Faron Duhe helped his son reimagine a 1966 Chevy Impala so they could enter it into the 25th Anniversary 2019 Hot Rod Power Tour.

The first step in the transformation was to pull off the Impala’s vinyl top and apply a Rustoleum coating to the exterior. Jacob had help from his father and Mike Torres of Torres Service Center when it came time to swap the body and drop a new engine into the frame.

According to Jacob, air condition, power steering and a dependable cooling system were the most important factors in preparing the Impala for a 2,000-mile round trip.

Faron looks forward to spending time with his son while journeying to new cities and seeing close to 6,000 classic cars on the Hot Rod tour.

“I more or less grew up restoring classic cars in my younger years before I started with the fire department,” Faron said.

He received a ’64 Chevy Impala from his father, who bought it new from Rainbow Chevrolet. Faron had the car painted in 1979 and parked it in the garage, where it remained for more than 30 years. By the time it came out of the garage, Jacob was in high school and had a knack for automotive work.

Over the past seven years, Jacob has restored approximately seven cars, starting with a 1958 Chevrolet Brookwood Station wagon.

His favorite project was a ’58 Chevy Biscayne, the sturdiest car he’s purchased, and he has plans to reconfigure a rare 1985 Camaro.

Jacob, who works at Marathon, said the restorations are completely separate from his career.

“It’s strictly passion for the cars,” Jacob said. “I’ll normally enjoy them for a while and then pass them on. I really don’t do it for profit much either. I get what I can get back out of them.”

Given extensive repairs can cost up to $15,000, Jacob said saving money is essential. A shop, however, is not required.

“I build a majority of my cars either outside in the driveway or under a carport,” Jacob said. “You don’t need any fancy lifts. You just gotta have the drive to do it.”