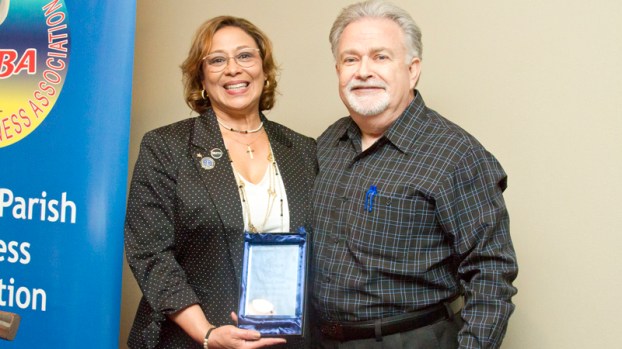 D.A. talks impact of unanimous jury law: “I urge everyone to participate in their civic duty”

LAPLACE — The District Attorney’s Office and Sheriff’s Office must work a lot harder to defend public safety in St. John the Baptist Parish in light of a recently passed Louisiana law requiring unanimous juries to convict in criminal trials.

The law, approved by voters during the November election cycle, applies to all crimes occurring after Jan. 1, 2019, and presents an additional challenge to prosecutors, according to District Attorney Bridget A. Dinvaut.

Dinvaut passed out yellow envelopes to members of the St. John Parish Business Association in an interactive demonstration of the justice system during the group’s meeting this month at Petra’s Restaurant.

Two Business Association members were tasked with randomly drawing cards to determine evidence observed at the crime scene and presented in court.

When the drawing failed to produce concrete evidence including a murder weapon or DNA matches, the mock jury voted not guilty.

“In any given crime that occurs, we don’t know the cards that are going to be dealt,” Dinvaut said. “This means we’ve got to be on our jobs, not just the Sheriff and the D.A., but the community too. I urge everyone to participate in their civic duty, because this is going to be a hurdle for me, for the sheriff and for everybody who lives here.”

In the case of a split jury, the District Attorney’s Office would likely receive motions to reduce the defendant’s bond to get him or her released from prison.

To avoid this outcome, the case could go back to trial continuously, Dinvaut said.

If a resolution still is not reached, a plea deal could be considered.

Business Association member Steven Louque said the unanimous jury process could impede the right to a fair and speedy trial.

Louisiana was one of only two states still abiding by the 10 out of 12 rule, according to Dinvaut.

The rest of the country, including federal courts, already adapted to unanimous juries.

There is potential for those previously convicted to return to court, Dinvaut said, noting there is a movement among imprisoned individuals who didn’t have the opportunity to have a unanimous jury.

Business Association members were concerned by that possibility.

“The law was not passed with a retroactive clause in it,” Louque said. “They have no argument.”

Members also learned of a proposed law to allow convicted felons to sit on juries.

Business Association members Linda Stein and Fran Meyers said the presentation gave them a lot to think about.

“I always like to hear Bridget Dinvaut talk about the court system,” Meyer said. “It’s very informative to hear how the criminal justice system works.”

Dinvaut also discussed justice system funding, driven by court costs for those who violate the law. Tax dollars from good, law-abiding citizens do not fund the court system.

She said there are 80 current and pending prosecutions of violent crimes in St. John the Baptist Parish.

St. John Parish yet to clean up janitorial contract conundrum

LAPLACE — There is nothing clean and easy about St. John the Baptist Parish Government’s attempt to award a janitorial... read more