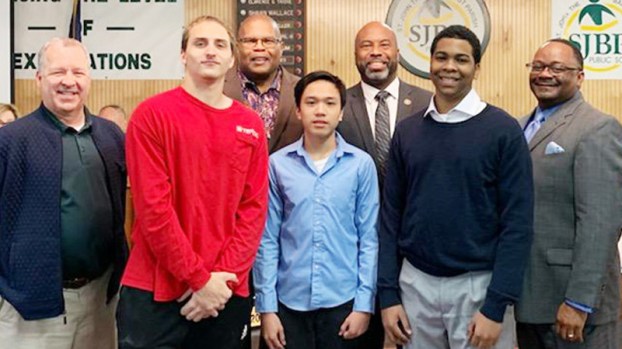 Smith, a STEM Magnet Program student, is following in the footsteps of his chess coach, Rene Phillips, a national master who picked up the game on a dare from his West Jefferson High School football coach.

The STEM team won first place in the novice division March 30, all while fielding a team of three players in a four-person category.

“We were up against perennial powers like Lusher, Ben Franklin and Patrick Taylor,” Phillips said. “These are schools that have fielded formidable chess teams. To create a climate of chess as a mental sport and expose kids to an entirely different type of competition, focusing on academia, and having a championship team the first year is mind-boggling. It’s a rocket start.”

Smith was apprehensive at first, looking around the room and seeing opponents with far more tournament experience.

He first picked up a chess piece two years ago as a seventh grader at the urging of his mother, but he’d only played casually and without strategy.

“I was nervous, but the nerves went away after I won the first game,” Smith said.

By the end, he tied for second with three wins and one loss against veteran players.

Matthew Billings, a football player for the East St. John High Wildcats, earned a runaway victory by outsmarting the competition in all four rounds.

Billings advanced to a national qualifying tournament last weekend, where he performed well despite not advancing to nationals. That title went to defending champion Dex Webster, who comes from a family of national masters.

Smith said having football players on the chess team serves as an advantage.

“I think it’s cool because everybody underestimates you, especially if you’re a really dominant player,” Smith said. “People are going to take you lightly and make moves that aren’t well thought out.”

The team has “totally stomped out that negative stereotypes of the dumb jock,” according to Phillips.

The best news, Phillips said, came this week as the School District announced it would support the K-9 players’ run to the national competition April 26-28.

He said chess exercises parts of the brain used for critical thinking and problem solving, adding chess play is linked to improvements in standardized test scores and self-confidence.

Mackenzie Vanatta and British Stampley joined the lunchtime group a few weeks ago.

While Stampley has some experience with the game and seeks to improve her strategy, Vanatta is a newcomer.

“I wanted to see what it was all about,” Vanatta said. “It really intensifies the frontal lobe of your brain and makes you use both sides.”

Paul-Williams said the STEM school team is a smart group, adding the Scholastic competition among veteran players wasn’t much different from playing classmates after school.

Rodrigazo, the youngest on the team, was nervous at the beginning of the competition.

“I looked around and they were all pros,” Rodrigazo said.

“I was scared, but I remember coach Phillips said put your hands together, think before you move, just meditate and it will turn out good.”

Rodrigazo hopes to improve his game and earn a shot at academic scholarships.

During last week’s competition, Phillips won the professional division and qualified to represent Louisiana at a national chess competition in August.

Phillips ranks in the top five percent of the nation and has been named a national master.

RESERVE — Two Riverside Academy seniors are headed to Pineville this fall to take their respective athletic careers to the... read more