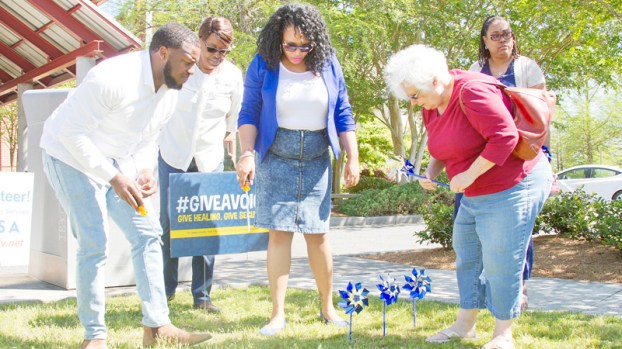 “It’s a child-friendly symbol that opens a way for parents and adults to start that conversation with their children about child abuse,” Reynolds said. “It’s an attention grabber that gets people to ask questions.”

Jodi Luna of LaPlace has given a voice to 16 children across six cases since becoming a court appointed special advocate in 2017.

Luna helped plant pinwheels Wednesday in hopes of recruiting others to advocate for local children on waiting lists to receive CASA volunteers.

“You go to court for them and make sure their voices are heard even if they can’t be there,” Luna said. “Mine have all been really small children. They can’t speak for themselves, so I just make sure they have a voice. We make sure, no matter what, the best outcome comes for them, whether it’s with bio parents or whether they are adopted out.”

Luna, who also operates local pet adoption group “Froggy’s Mission,” has long wanted to help children in her community. She grows close to the children in her cases and does whatever she can to improve their situation, even if it means asking around to provide them with donated clothing, furniture and other resources.

Vitrano feels for the children who have suffered abuse and neglect, robbed of the carefree childhood all should be entitled.

“As a grandmother and a mother, your instinct is to protect children,” Vitrano said.

“Some parents don’t have that natural instinct, or they are hindered by drugs or from being abused themselves. It’s really sad, but the children are the ones that suffer, and it’s up to us to make sure they’re in the best and the safest place possible.”

According to Bliss, it’s easy to take a stand against child abuse by attending CASA training one night per week for five weeks. CASA volunteers must be at least 21 years old.

Community members and businesses can also help raise awareness by setting up their own blue pinwheel gardens during April.

Advocate Supervisor Akeem Burl said giving a voice to children in need is a continuous fight.

“Some people might say planting the pinwheels seems repetitive, but we always like to remind people we are still advocating for the same children,” Burl said. “If not those children, then more children each year.”

To report signs of child abuse or neglect, contact the local Department of Children and Family Services at 985-652-2938.

LAPLACE — A local man arrested Thursday is accused of raping a child. Leroy Vicknair, 50, of LaPlace, is charged... read more