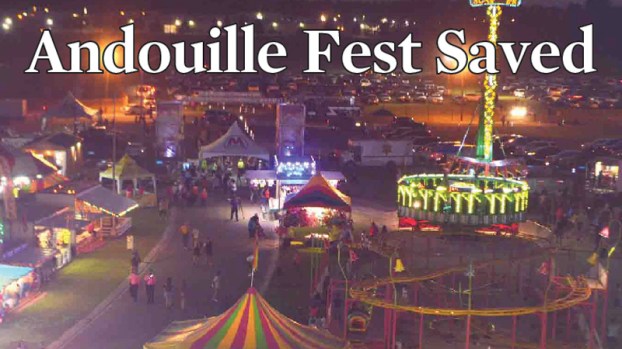 A motion to cancel the Andouille Festival gained zero traction this week with the St. John Parish Council, as members failed to generate a second, thus killing the measure.

LAPLACE — Pass the hot sauce. The Andouille Festival is on.

By an overwhelming margin, the St. John the Baptist Parish Council rejected Councilman Larry Sorapuru’s bit to shutter the venerable festival, which was first held in 1972 under the moniker of the LaPlace Andouille Festival at the LaPlace Drag Strip.

Sorapuru’s motion gained no seconds from his colleagues during a Council meeting Tuesday night, thus ending the councilman’s high-profile campaign to sack the event. Every council member except Sorapuru voiced his or her support, at times passionately, in favor of maintaining the festival.

“Not now, or ever have I been in favor in favor of canceling the festival,” Councilman Marvin Perrilloux said. “I’ve been going to this since it was at the drag strip.”

Despite an obvious lack of support, Sorapuru remained defiant, even after a rare parliamentary move that opened the floor for additional discussion after the motion was rejected.

As he has repeatedly maintained during the past two months Sorapuru said his concern was financial, noting the parish loses money on the festival, although supporters reminded him the three-day event attracts not only parish residents but also tourists from throughout southeast Louisiana who generate tax revenue by staying overnight at local hotels and eating at area restaurants.

“I’m not going to back off,” he repeated, adding he has “no regrets.”

Parish President Natalie Robottom said the festival is an economic development driver and on several occasions said it was a quality of life event for the community, a theme echoed by Council members. She noted the festival generates funds for non-profit organizations, schools, civic organizations and small businesses.

“Plus,” he added, “we are known as the Andouille Capital of the World and then we are going to cancel what we are known for? That does not make a lot of sense.”

Council member Jaclyn Hotard-Gaudet said she was “totally against” shutting down the festival, saying that associating “the word loss is offensive to the festival.”

“This is a quality of life event,” Hotard-Gaudet said. “It’s attended by thousands of residents on both sides of the river.”

She said she has talked to officials from similar regional festivals and was informed they lose money as well, including the immensely popular Gretna Festival.

“We would be doing a disservice to the community to even entertain canceling the Andouille Festival,” Hotard-Gaudet said.

However, all emphatically stressed the urgency in identifying ways in which the parish can trim expenses. Chief Administrative Officer Laverne Toombs said the parish would be paying far less to the agency employed to market the event, explaining that much of what the agency has been doing in the past has moved in house.

She said such items as reaching out to media outlets to secure the best rates possible for media time and selling sponsorships have been assigned to parish employees.

“(What the agency was doing) has been scaled tremendously,” she said. “Some things we do not have the technical skills to be able to do, so the marketing firm must provide that service.”

Sorapuru said his goal is to find a non-profit organization willing to take over the three-day event, but Robottom pointed out that is unlikely because the festival will likely never be a moneymaker and no local organization is willing to absorb the loss.

Robottom and Hotard-Gaudet also warned that turning over the festival to a non-profit would mean the parish would lose control of the event, and rates for admission, booths, drinks and food would likely see an increase.

Hotard-Gaudet said such a scenario would turn the Andouille Festival, which currently has a token admission charge of $3, into an exclusive event.

Council Chairman Thomas Malik ended the one-hour discussion with a bit of levity, saying LaPlace the “only place in the world where you can get authentic Andouille.

“You can go to New York and get that fake stuff.  All of these posers; restaurants in New Orleans buying (Andouille) from Indiana.”

The festival is scheduled Oct. 18-20 next to the St. John Community Center.