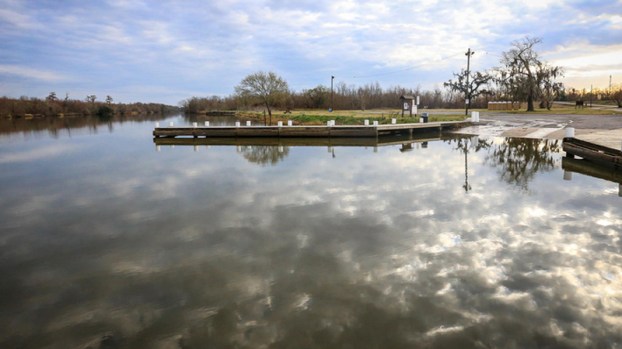 Three local people narrowly escaped drowning during Thursday’s severe weather event, when their car hydroplaned and shot into the deep water of the Bonnet Carre Spillway off of Airline Highway.

MONTZ — Gerald Johnson was driving Darrellyn Myles and her 11-year-old son back from the Edgard Courthouse during last Thursday’s severe weather event when the car hydroplaned and shot into the deep water of the Bonnet Carre Spillway off of Airline Highway.

What could have been a watery death ended without injury, as the three occupants managed an escape effort facilitated by a couple of Good Samaritans.

Johnson was driving the car through heavy rain around noon. He had driven through LaPlace and was approaching the Spillway Bridge toward Norco when he hit something obscured by rain and puddles on the roadway and lost control of the vehicle.

The events that followed happened in the blink of an eye, according to Myles. She recalls opening her door and seeing Johnson and her young son escape through the windows.

“The car went under so fast, I feel like we only had five seconds to get out. You either get out, or you’re dead,” Myles said. “With all the current in the water, it was a struggle to fight my way to the land.”

As Myles grabbed her child, Johnson grabbed her and heroically began pulling them to shore against a raging current. As they approached land, two men who had pulled over and jumped into the water reached out and pulled them the rest of the way.

Troy Bonfanti was driving ahead of the scene when he looked to his right and saw a sinking mass in the water, a sight he interpreted to be a capsized boat.

Once he saw people struggling in the water, he pulled to the shoulder and started swimming toward them.

“I think if anybody would see somebody struggling like that, it’s just common sense to help,” Bonfanti said.

“I think that’s just being a normal human being.”

Swimming into the freezing water wasn’t as easy as expected when dressed in full chemical plant work gear, according to Bonfanti.

“I got out about three or four strokes, and I realized I still had my boots on and my boots were weighing me down,” Bonfanti said.

He returned to the shore to remove the boots and saw Johnson had grabbed hold of Myles and her son. Bonfanti waded out into neck deep water and reached out to pull them when Johnson was close enough.

Afterward, Myles and her son warmed up in Bonfanti’s truck. Bonfanti maintains he didn’t do much, giving the true lifesaving honor to Johnson.

St. Charles Parish native Johnny Compton is well acquainted with the area, which includes a 12-feet-deep pond when not inundated with water from the spillway locks. With an additional 15 feet of water filling the area, Compton estimates the car sank up to 20 or 30 feet.

Compton saw the car hydroplane about 100 yards in front of him, overcorrect in a turn and ricochet into the water.

Like Bonfanti, Compton wasted no time jumping into the water to assist in pulling the trio to shore.

“I have three kids that drive, and I hope that if it ever happened to one of mine, that a bystander would help them,” Compton said. “That’s all I wanted.”

Compton agreed Johnson played the most important role by having the foresight to roll the windows down on the sinking car, thereby equalizing the pressure and allowing for an escape.

“If he wouldn’t have done that, they would’ve drowned,” Compton said.

“The only thing I did was help assist that man to get them out the water.”

Johnson was humble in his response, saying, “I’m just happy to be alive and happy to get everybody out.”

Myles said an emergency room check-up followed, and no injuries were sustained.

Though beyond grateful to be unharmed, Myles said it’s been a struggle to adjust to having no car.

“We’re doing OK physically. Mentally, we’re still trying to process everything to get over it,” Myles said.

“I want to tell them I really, really appreciate them coming to help us. They are heroes to us.”

Myles hopes the experience brings awareness to putting barricades on the roadway.

Little Sisters of Hoboken performing “NUNSENSE” this weekend in Norco