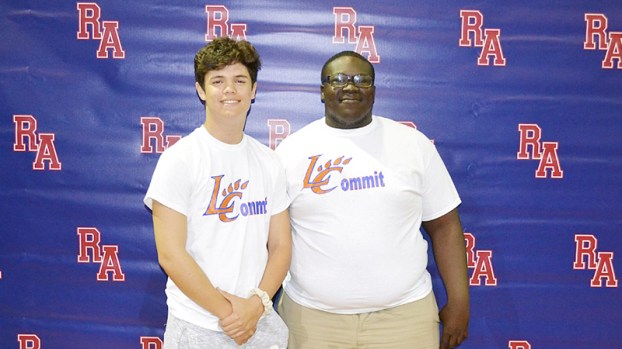 RESERVE — Two Riverside Academy seniors are headed to Pineville this fall to take their respective athletic careers to the collegiate level.

While Colton Wilson was a diligent member of the Rebels football and baseball teams, his heart belonged to soccer from the time he was 4 years old.

He started for four years on varsity with Riverside Academy, specializing in midfield and often playing exceptional defense.

The first team all-district and all-parish player is journeying to Louisiana College to join the Wildcats soccer team, and said he couldn’t have advanced to this point without help from his high school coaching staff.

Head coach Ryan Zeller was a guiding force in helping Wilson work through competitive anger on the soccer field.

“I learned how to control my temper when I was there,” Wilson said. “Coach Zeller took over last year, and he helped me out a lot with the anger, communicating better with him and understanding the game.”

In visits to the school, Wilson said he loved the atmosphere and small town feel. He plans to study business, though he’s still deciding his ideal future career.

“I feel it’s best for me to go to a small, private school,” Wilson said. “I’m ready to get out there, make new friends and show what I can do on the college level.”

Wilson said his passion for soccer has been shaped by Portuguese soccer star Cristiano Ronaldo, known for his quick passes and scoring.

Wilson is the son of Moya McNulty and Wade Wilson of LaPlace.

Also moving out to Louisiana College is Wilbert Robertson IV, known at Riverside Academy for his all-district football performance as a guard and defensive tackle.

A self-described “hardworking, respectful and easy-going guy,” Robertson is able to roll with the punches, and looks forward to proving his worth at defensive tackle in college.

Robertson looks up to NFL star Aaron Donald and other greats at his position.

In addition to playing football, Robertson is eyeing a degree in mass communications to fulfill his dream of becoming a sports anchor.

“When I went on a visit earlier this year, Louisiana College felt real home-like,” Robertson said. “The way they take education seriously in the small classrooms will make it easier for me to learn and meet new people in a family-oriented environment.”

Sports keep Robertson busy and focused. When he wasn’t on the football field at Riverside, he was running bases on the baseball field or throwing discus and shot put in track & field.

Football is a sport he’s loved since age 6, and one of his favorite high school memories is starting in the state championship game during his sophomore year.

“My senior year, even though we didn’t have the best record, it was still fun just playing with my brothers,” Robertson said.

Robertson strived to be a visual leader to the younger players by demonstrating hard work and letting them know criticism from coaches is an opportunity for growth.

Robertson is the son of Christi and Wilbert Robertson III.