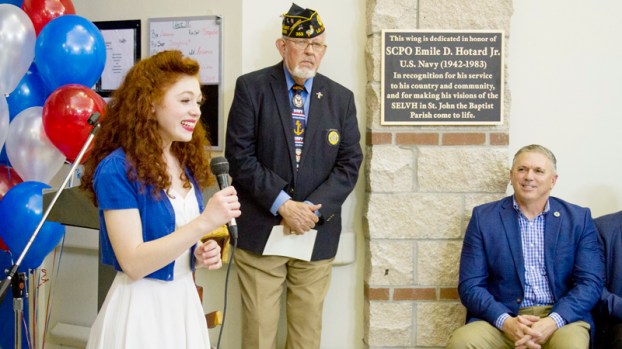 RESERVE — The Southeast Louisiana Veterans Home was moving toward an early 2000s construction in St. Bernard Parish before Emile D. Hotard Jr. of Reserve met the Louisiana Department of Veterans Affairs with a determined plea.

Once he had Strickland’s attention, Hotard made it known the new veterans home was destined for Reserve. He recruited veterans for a letter-writing campaign and saw it through.

“From that moment, we started a conversation that led to the culmination of this beautiful home,” Strickland said. “He would always give the very best advice. You could not ask for that kind of concern and that quality of being as great a veteran and an American as Emile Hotard.”

A photo of the 2005 groundbreaking ceremony still hangs in Hotard’s beloved memory room, three years after he passed away on April 1, 2016, only one week short of his 93rd birthday.

A full house of elected officials, friends and family convened at the Southeast Louisiana Veterans Home on Friday as the second wing of the building was posthumously dedicated in honor of Hotard.

The ceremony was a surprise to Hotard’s wife, Gerry. It was an emotional week, with the dedication placed between the anniversary of her husband’s passing and what would have been his 96th birthday.

“It makes me wish he was here to see it,” Gerry said. “He was such a proud American and a very, very patriotic man. He wore a (military) pin every day on his collar.”

Near to Hotard’s heart was his memory room, filled with military accomplishments and football mementos.

Born on April 8, 1923, Hotard joined the United States Navy during WWII and attained the prestigious rank of Senior Chief Petty Officer. He retired from the Navy after 20 years but still bled red, white and blue.

Hotard kept in close contact with his fellow Navy men, and he was particularly fond of his River Parishes recruits, called “The Untouchables.”

He received his bachelor’s degree from Louisiana State University and his masters from Ole Miss, eventually moving on to become an educator, football coach and principal in St. John Parish.

Hotard met his wife at a masquerade party after decades of being a bachelor, and the two were married in 1969. They have two daughters, Maria Hotard Stelly and Alison Hotard Treas.

Katelyn Gulotta, a member of the Victory Belles and Emile D. Hotard Jr.’s family, sings a song during a dedication ceremony in his honor.

His daughters remember him as a walking history book and an “honest man with Christian values.”

“I can’t think of anything my Daddy would rather have his name on than the Veterans Home,” Treas said.

According to Stelly, Gerry received a smaller version of the plaques to take back home.

“If anyone knew about my Daddy’s memory room, this would complete it,” Stelly said.

MONTZ — Gerald Johnson was driving Darrellyn Myles and her 11-year-old son back from the Edgard Courthouse during last Thursday’s... read more