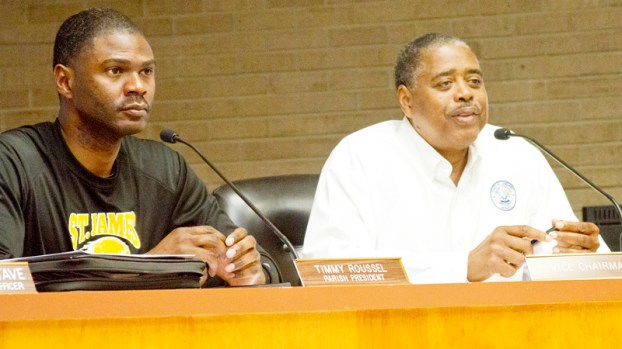 State Rep. Ken Brass and State Sen. Ed Price speak in Vacherie during a meeting and announcement concerning the installation of a traffic light at the intersection of Highway 3127 and Highway 3213.

VACHERIE — The intersection of Highway 3127 and Highway 3213 will receive a traffic signal within six months, a safety upgrade prompted by years of collisions and fatalities at the dangerous intersection.

West St. John High School teacher Toneka Walker Terry, 51, is among those killed in collisions that could have been subverted by a traffic signal.

Terry was on her normal commute to work the morning of Jan. 23, traveling south on 3213 with her 14-year-old daughter in the passenger seat. After stopping at a stop sign, Louisiana State Police said Terry failed to yield, while turning left onto 3127 and was struck on the driver’s side by a Caterpillar dump truck.

She sustained fatal injuries and was pronounced dead on the scene, while her daughter sustained moderate injuries.

A nearly identical scenario played less than five weeks later, when 21-year-old Christopher Turner Jr. stopped at the stop sign on 3213, failed to yield and turned left into the path of an oncoming Dodge Ram, authorities said.

Turner, of Baton Rouge, was pronounced dead on scene.

According to the Louisiana Department of Transportation, six crashes, typically correctable by the installation of a traffic signal, have been recorded over a 12-month stretch. Recent deaths provoked calls from leaders in St. John the Baptist and St. James parishes to install a traffic signal despite the added challenge of not having electricity available at the area.

Conversations started in March, and St. James Parish President Timmy Roussel said he’s “never seen anything move so fast.” Partnerships with the Louisiana Department of Transportation and Development and Entergy place the traffic signal on an installation fast track with the two parishes teaming to share costs.

Price said it could take 20 weeks to get power to the area.

“It means a lot to St. John Parish and of course the school board because they have a lot of buses coming across the bridge, making that left turn to go to West St. John,” Price said. “Safety means so much, especially for our kids, and for everyone who travels that highway.”

“Traffic signals will always increase traffic delay on the main roadway and the frequency of rear-end collisions,” Ewing wrote in a letter. “For this reason, it is important to carefully evaluate the intersection for justification of a traffic signal. After reviewing traffic volumes and crash data for the intersection, I believe a traffic signal is warranted at this time.”

The announcement from Transportation Department came less than three weeks after the St. John School Board drafted a resolution encouraging the appropriate agencies to re-evaluate the intersection and address any deficiencies.

State Rep. Ken Brass (D-Vacherie) said the state would absorb the cost of the traffic signal installation, though St. John and St. James must come up with the money to provide electricity to the area.

The St. John School Board, St. James Parish School Board and parish councils in both parishes have proposed splitting Entergy costs for electrical installation four ways. Each party will pay up to $25,000 to cover an estimated $93,000.

Entergy representative Rhonda Colar-Myles said the cost could go up or down, noting the estimation accounts for $53,000 in materials and $40,000 in labor.

“To my understanding, we need 15 to 20 poles to run a service line that way,” Colar-Myles said. “It’s a community effort. When we hear of fatalities in the area, we want to make sure we can do everything we can to make sure the residents are safe.”

Councilman Larry Sorapuru Jr. said St. John Parish is fully on board and plans to follow the footsteps of the St. James Parish Council in drafting a resolution.