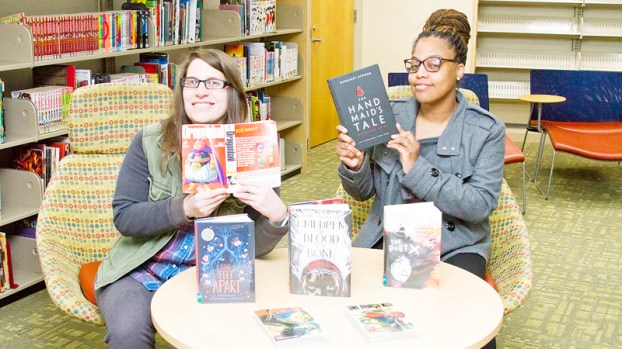 LAPLACE — On any given weekday, there’s a good chance Norman Volion or Armand Richard can be found at the computers of the central branch library in LaPlace.

Volion calls the library system the “hidden jewel of the parish,” defined by quality service that keeps him coming back four times a week.

Richard uses the library for his Internet and printing needs as part of his morning schedule, followed by exercise at the neighboring Thomas F. Daley Memorial Park.

The two men were among 2,300 computer users and 1,800 Wi-Fi users recorded at the library in March, according to central branch supervisor JoAnn Proctor.

Celebrated April 7-13, National Library Week recognizes the library’s impact on frequent patrons like Volion and Richard while spreading awareness of the multitude of services offered.

Amanda W. Alexander, from left, Trina Smith, JoAnn Proctor, Regina Burke, Carly Maurin and Kearston Poche are some of the
smiling faces behind the team looking to showcase all that is offered from within the St. John the Baptist Parish Library System.

“We want to become more relevant and remind the community we’re not just about books, DVDs, computers and all,” Smith said. “We’re much more than that.”

Richard enjoyed the library’s Black History Month program, and his grandchildren were delighted by a Christmas celebration complete with Santa pictures.

“Everyone is real courteous and helpful,” Richard said. “It’s a great experience at this library. I wasn’t aware when I was still working.”

The push to expand the library’s reach includes a focus on STEM programming, including afterschool activities to teach math and robotics.

Children in the Crazy 8s Math Club can move and play as they complete hands-on activities in a laidback environment, according to team member Carly Maurin.

Maurin has also overseen “Junk Drawer Robotics,” affiliated with 4-H members but open to all students in grades 4-12. Members learn robotics at the foundational level, starting with objects easily found around the house.

The library already has a smart board, three study rooms, two convertible meeting rooms, more than 40 computers and the capability for audio and green screen video recording.

Interactivity is seen in an ongoing poetry contest that allows teens and tweens to record themselves and submit entries to the library’s Facebook and Instagram pages through April 20.

Kevin Travis stands by the library’s Autism display, which he was instrumental in creating.

The age of technology expands to computer classes held weekly to teach adults the basics of browsing the Internet, sending emails and using social media.

Proctor said library team members collaborate to meet the needs and interests of the community.

“We work very well together cohesively,” Proctor said. “We all have different experiences, but we bring it together to serve the community. That’s what we’re here for. It’s a collective mindset.”

Though the library has been without a director since January, Proctor said operations are running smoothly under the leadership of assistant director Dana Douglas.

“I think everybody would agree all of our policies and procedures are still being followed because that is what she abides by,” Proctor said.

Ideas for future programming include men’s health talks and educational events for expectant mothers. Past programming has featured guests ranging from musical performers to body artists.

Library members are working on a new initiative to secure free summer lunches for young people ages 5 to 18, according to Smith.

Working with schools is a vital component to the library, Smith said. “Talk with the Supe” meetings allow library team members to interact with parents, while other initiatives are in place to promote literacy before kindergarten.

“We want people know that we are here for them because without them, there would be no library,” Smith said.

“The employees work very hard to make sure the community’s needs are met each and every day.”

Graphic novels at the library promote early literacy by transitioning reluctant readers from picture books to chapter books, according to Alexander.

Large-print books and Spanish collections are also offered to meet the community’s needs.