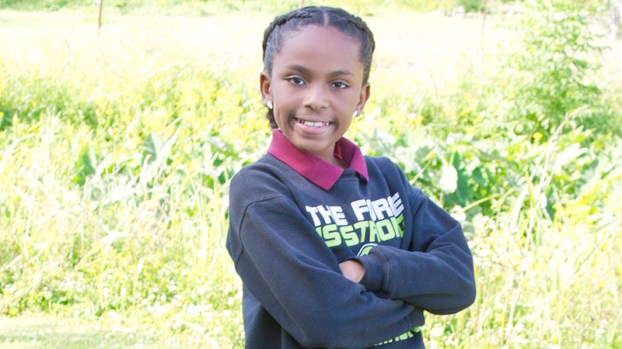 LAPLACE — At only 1 year old, Kayden McGee of LaPlace was diagnosed with a bone structure irregularity contributing to 90 percent hearing loss in one ear and more than 30 percent loss in the other.

With help from her hearing aids, Kayden participates in choir, talented music and talented theater programs while maintaining a rigorous practice schedule for competition dance.

Kayden is performing seven dances this spring at Performing Arts Dance Academy, many of which have won titles and trophies at weekend competitions across Southeast Louisiana.

She was named Junior Miss Bravo and Junior Miss Beyond the Stars for highest overall scores in her competition categories last month.

Kayden McGee performs an aerial during a recent stage showcase.

In January, she took her dancing talent to Junior Beta Club Convention with a contemporary performance of “A Thousand Years.” The performance landed her and two others a golden ticket to represent St. John the Baptist Parish at Junior Beta nationals this June in Oklahoma City.

“I’m nervous sometimes on stage when there’s a small crowd, but when there’s a big crowd, I’m not nervous,” Kayden said. “It’s more people watching me, so I have more fun with it.”

When she’s not performing, she practices four days a week and spends another evening assistant teaching the 2-year-old dance class.

Kayden’s hearing has improved after four ear surgeries, according to her aunt and guardian Ryshique Williams, but she’s not out of the woods yet.

Children’s Hospital is a bi-annual destination, and she’s due for a CAT scan next month to investigate hearing loss and constant earaches experienced since February.

Even amid splitting earaches, Kayden isn’t one to voluntarily stay home from school or dance, according to Williams. She toughs it out, determined to keep up with each lesson.

It’s a quality Kayden shares with her grandmother, Sherial Lewis.

“In spite of having a disability, she doesn’t let it stop her,” Williams said. “In our house, it’s not an option. My mom has sickle cell disease. She’s been sick her entire life, but she taught for 30 years. You have a disability, but the disability doesn’t have you. What are you going to do with it?”

Kayden is mostly self-sufficient when it comes to changing her hearing aid batteries at school. She’s starting to learn sign language as a precautionary measure in case of further hearing loss.

“I know the alphabet and how to spell my name,” Kayden said. “I know how to say, ‘My name is Kayden.’ I can say the color yellow and the word for dog; the basics.”

Williams said the biggest challenge ahead of Kayden is learning how to self-advocate and speak up when noisy environments amplify in her hearing aids and leave her on the brink of tears.

Despite the challenges, Kayden excels in school and never makes less than an A on her report cards. She was recently accepted into the St. John Parish gifted academic program and received trophies for advanced scores on the LEAP test.

In talented music, she sings, plays piano and has a goal to learn the ukulele. She’s also involved in acting, with plans to participate in an upcoming production of Aladdin.

Kayden is strong in her faith, evidenced through weekly Christian Club meetings and her connection to First Antioch Baptist Church in Gramercy.

Kayden McGee poses with some of her recent dance awards.