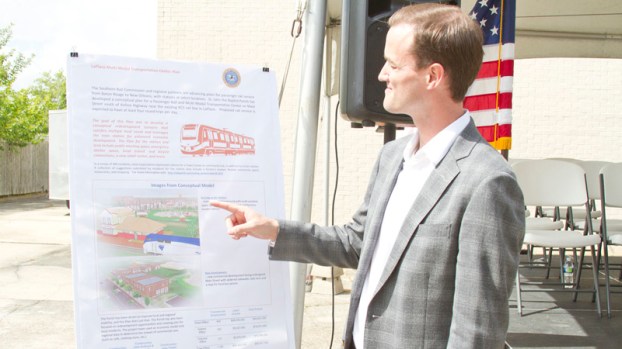 LAPLACE — Dozens of community members gathered at the corner of Main Street recently to reimagine the street with residential complexes, retail shops, cafes and green space to host everything from farmers markets to outdoor movies.

At the center of it all would be a multimodal transit station, placing LaPlace as an all-important stop for passenger train travel from New Orleans to Baton Rouge.

Friday’s community presentation marked the end of a feasibility study funded through a $145,000 grant from the Southern Rail Commission.

Timelines have not been set for construction, according to Parish President Natalie Robottom and Planning and Zoning Director Rene Pastorek. As LaPlace and each of the other stops along the rail line finalize feasibility research, the state can secure funding as it becomes available.

Community members had more than a few questions about the multimodal station, how it can coexist with existing fixtures of LaPlace and whether incoming crowds impact public safety.

The view north along Main Street in LaPlace could change drastically in a few years if plans are followed through on proposed
construction of a multimodal transit system from Baton Rouge to New Orleans that would include a stop in St. John Parish.

In a social media comment, Hayley Tramonte Favaloro of LaPlace said her children were excited at the prospect of a train stop practically in their backyard.

However, Favaloro is concerned train travel could bring an influx of criminal activity and the potential of a quick escape.

“No one is gonna jump off a train, rob us then jump back on the train and disappear – too close for comfort,” Favaloro wrote.

A resident in attendance Friday said the surrounding area is hazardous to pedestrians on an ordinary day, and he worries a transit station would further incur traffic problems.

“As a would-be pedestrian on Old 51, I feel like I’m taking my life in my hands on a good day,” he said. “I’m wondering if the study that was undertaken would take into account the impact on Old 51 if we put a major attraction at the opposite end of Main Street.”

Pastor Donald August Sr. of Rising Star Baptist Church questioned whether there would be restrictions on business development in the area to maintain a family-friendly atmosphere.

The feasibility study did not specify which businesses could come in the area, Pastorek said, though it laid out an annual economic impact of $40 million, with more than 1,000 jobs created in construction and business expansion.

Since funding is not immediately available, Pastorek said the next step is to rezone portions of Main Street for business development. Once funds are available, the existing rail line will require upgrades to allow faster travel speeds.

“An additional left turn on Main Street and some signal timing optimization is all that’s really needed to support that,” Pastorek said.

The “Main Street” scenario also features a parking garage and a pedestrian walking plaza. In addition to offering convenient travel to Saints games and other events, the multimodal station would serve as a town center with Wi-Fi and food options.

According to Robottom, Main Street improvements and the transit station put St. John Parish in line with cultural investment across Southeast Louisiana.

“It will serve to build a sense of character like other towns in the area, such as Kenner, Amite Covington and downtown Baton Rouge,” Robottom said.

“Those are goals that we should have. That attracts a type of young people looking to live in those places. Many of them want access to things like walking, biking, trains… That’s a problem for us here in St. John because young people are leaving here. They don’t have options to keep them here.”

Robottom said the multimodal station would unite all forms of transportation, adding the location would work hand-in-hand with River Parishes Transit Authority to connect visitors to nearby destinations.