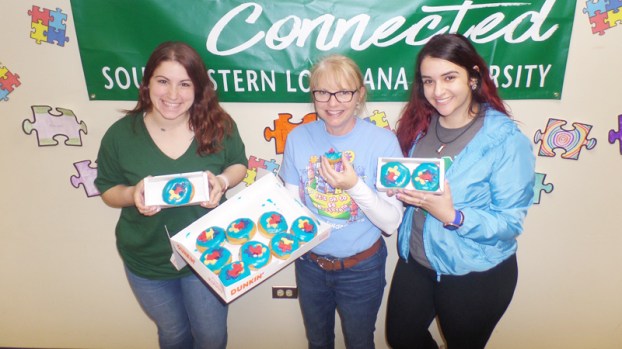 LAPLACE — Eye-catching blue donuts with puzzle piece toppings will drive proceeds for autism research this month at Dunkin’ Donuts of LaPlace, thanks to a sweet initiative by a local woman.

Leila Ahmad of LaPlace started the tradition in 2018, when she and a friend raised $400 and dropped off dozens of donuts to special education students at two St. John the Baptist Parish public schools.

This year, the autism awareness donuts have expanded to Dunkin’ Donuts in Covington with help from LaPlace storeowner Firan Chauhan, who operates both locations.

Ahmad, a 2017 graduate of Riverside Academy, delivered a box of donuts Tuesday to the special education department head at Southeastern Louisiana University. She said advertising and outreach would be a focus this year to increase proceeds from both locations.

“I just liked seeing everybody smile about it, especially when we brought them to different schools,” Ahmad said. “They were happy about it.”

Autism awareness donuts are available throughout the month of April at Dunkin’ Donuts in LaPlace.

Ahmad plans to reach out to East St. John High School and LaPlace Elementary School to plan visits this month.

While most people have heard of autism, awareness efforts serve as a reminder to treat everyone with respect.

“People are different, but everybody is different in their own way,” Ahmad said.

“Judgment shouldn’t be about, oh, you look different or you act different. Everybody is different. We all need to be accepted.”

Autism awareness donuts are 99 cents each, $1.08 with tax, according to LaPlace store manager Amber Smith. Each sale contributes to The Autism Society to support education, advocacy and access to information.

“I think it helps spread the mental awareness of it and lets more people know about autism,” Smith said. “I’m a psych major, so I’m really big on awareness. Maybe it will help people ask questions.”

Ahmad recently changed her major to special education at Southeastern Louisiana University, and she searches for any opportunity to impact others’ lives.

“I always wanted to make a difference, and this is one of the ways it’s possible to do that,” Ahmad said. “With special education, of course all children need attention, but this takes a different kind of attention and patience. I feel like I can be the one to help make that difference.”

LAPLACE — Incoming St. John the Baptist Parish employees will likely see a change in the disbursing of funds for... read more