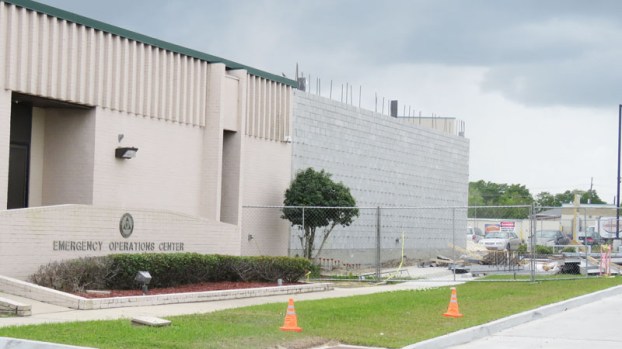 A 4,000-square feet safe room, right, is being constructed on the west side of the Percy D. Hebert Building, which will attach to St. John’s existing emergency operations center.

LAPLACE — St. John the Baptist Parish has an emergency when it comes to managing emergencies.

The central conflict comes down to which department occupies the parish president’s old office in the Percy D. Hebert Building at the corner of Airline Highway and Percy Hebert Road in LaPlace.

Parish President Natalie Robottom exited everyday use of the office a few months back to take up central administration operation on the second floor of the new St. John the Baptist Government Complex, which shares a parking lot with the Percy Hebert Building.

It has been assumed by some that Robottom was permanently exiting her Percy Hebert Building office, clearing the way for Sheriff Mike Tregre to assume nearly all of the office space for personnel consolidation.

Behind-the-scenes disagreement during the five months since the transition began has not led to a resolution. The controversy spilled into public view during last week’s Parish Council meeting.

Robottom is adamant that her office is doing everything it can to assist the Sheriff’s Office by turning over use of 26 offices and nine workstations. However, she feels the parish president’s office in the Percy Hebert Building must be maintained year-round under her purview, specifically for use during times of emergency situation management or planning.

During times of emergency response, Robottom is also seeking to maintain use of the old administrative receptionist area, copy area and conference room.

“We would need full access to the conference room and receptionist area, which is where we take calls, hold meetings and there must be a space to run those operations,” Robottom told Parish Council members. “We thought we were being fairly generous in providing the entire building, even offering up the (old Council) Chamber, which was initially going to be used for our Board and Commissioner meetings, but obviously there has been some continued discussion.”

Councilman Marvin Perrilloux said it was always the intention for the sheriff to have access to the Percy Hebert Building when the new Government Complex was built in an effort to house all Sheriff’s Office employees under one roof and eliminate rent payments taking place due to a spread out department.

“I can’t see why, in my opinion stubbornness, not to have the sheriff in that building,” Perrilloux said. “That doesn’t make sense to me. We’re here to save taxpayer dollars.”

“This is not about pettiness. This is reality. I’ve been around for ten years. I have used that space repeatedly.”

Perrilloux stressed he doesn’t want the parish president off site during an emergency, but suggested a temporary office could be set up and used in the Percy Hebert Building, which doubles as the emergency operations center, during times of need.

During a heated exchange, Perrilloux said there is nothing special about the office but a desk, phone and shower. He closed his emphatic remarks by telling Robottom, “Tell the truth. Tell it how it is.”

Robottom said a parish president needs to maintain that office when dealing with U.S. presidents and governors, who make appearances during times of extreme strife.

“The parish president has their own office space, shower and privacy because they are dealing with federal officials, state officials, individual meetings,” she said. “Many times we are on conference calls that are outside the rest of the team.”

Figures shared with the public indicate the Sheriff’s Office could save more than $61,000 a year in rent by bringing in personnel to the Percy Hebert Building.

Some of those savings would be initially offset with retrofitting costs to construct new interrogation rooms, interview rooms for children and expanded room for collection of tickets, taxes and fines.

“There needs to be handicapped accessibility in the front,” Sheriff Mike Tregre said.

“I appreciate the building. It’s going to take St. John the Baptist Parish Sheriff’s Office into the next 20 years. Consolidation under one roof, that is my plan.”

Robottom said the Sheriff’s Office could still realize rent savings by utilizing the space her administration has already turned over to the SJSO.

The construction is taking place next to the Percy Hebert Building.

Robottom, who is term limited and exiting office this year, said future parish presidents would need the Percy Hebert office to run emergency operations manned from the safe room.

Once completed, the safe room will provide sleeping space and shower facilities for up to 130 people and can be utilized as a meeting room or training space for day-to-day operations.

The new safe room will be attached to the existing EOC department, which houses St. John’s Department of Public Safety, Office of Homeland Security and Emergency Preparedness, Office of Fire Services and the 9-1-1 Communications Center.

The facility will be divided into two sleeping quarters, one for men and one for women, and include storage rooms, a shower and restroom facilities.

The building is being constructed above a 500-year flood plain to guard against flooding.

It’s been widely speculated that as many as five Parish Council members are considering running for the Parish President’s office in the fall.

Robottom appeared to address that assumption during her remarks to the Parish Council.

“Many times, you get help from the state, you get National Guard and you get people coming from all over the place. You can’t have the parish president in the main emergency operations center trying to run the event.”

The controversy is going to last, at least, another couple of weeks, with public and private conversations, no doubt, taking place until a resolution is reached.

The Parish Council voted unanimously last week to table public discussion on the issue when the heated back-and-forth stretched near the 60-minute mark of March 26’s meeting.