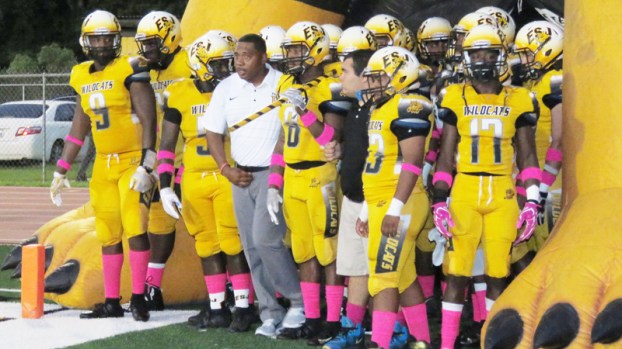 Wildcats head coach Brandon Brown stands with his team before they take the field in 2018.

ESJH lost that game on Nov. 9, 17-13, the culmination of a mediocre year that included a 5-5 regular season record.

Brown was hired in April of 2018 following a head coaching stint at 2A St. Helena College and Career Academy, where the Hawks wrapped a playoff season with an appearance in the state championship game.

He is tasked with similar rebuilding in St. John Parish.

Having a 12-month approach, a full load Spring schedule and players who are familiar with his expectations will make a significant difference in 2019, Brown said. The Wildcats Spring season starts with practice April 29, going three days a week and concludes with the Spring game May 16 at home against Ellender Memorial High School.

Brown said the game would be a serious competition with officials and each side’s “best on best.”

“We’re going to work our 2s in as much as possible to give those guys quality work, as well,” Brown said. “We’re just trying to get some work and get better.”

Brown, who doubles as ESJH defensive coordinator, is hardly working from scratch.

Following a disappointing 33-12 loss to Terrebonne Oct. 12, the Wildcats reeled off victories over Hahnville, Thibodaux and South Lafourche by a combined 119-28 margin to enter the playoffs playing their best.

“(Dauterive) is going to run the offense, bring some excitement back to East St. John and put some points on the scoreboard,” Brown said.

“You’ve got a guy with 40 plus years of experience in the building who brings a lot of knowledge. I learn a lot from him daily, just from his preparation. That was from day 1. He is helping me get the program back to where it once was. He is teaching us younger coaches how to prepare and how to work.”

Brown is also very complimentary of strength and conditioning coach Reggie Haralson, who he described as doing “an awesome job” with student-athlete weight training and conditioning.

“Our guys are working extremely hard,” Brown said. “They are itching for Spring training to start.  We’ve actually had the chance to have a complete offseason, which is something we didn’t have last year. Now, we are ready to roll.”

Brown said he and his players were disappointed in last year’s results.

“There is never a time when East St. John should be 5-5,” Brown said. “The goal is to take that next step. We’re trying to get back to the old East St. John football.

“We’re looking to build off last year. Just being in a system a whole year allows the kids to understand terminology, they understand expectations and I think that will be the biggest difference.”