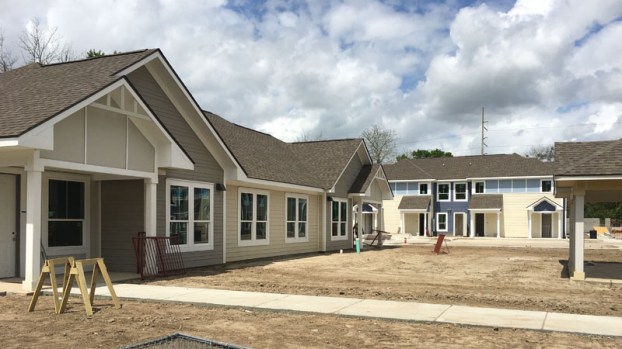 A 22-unit housing complex in Garyville is nearing completion.

GARYVILLE — Final touches are being completed on the first of what will be a 22-unit housing complex in Garyville, according to Trina Sanders, executive director of the St. John Housing Authority.

Sanders said work on the one-bedroom and three-bedroom units should be completed within the week, and work will soon begin on the two-bedroom apartments.

“The flooring was put in last week and (crews) are doing final touchups,” Sanders said at the St. John the Baptist Parish Council meeting Tuesday.

The Garyville project is being funded through a $5.3 million Community Development Block Grant grant. In 2015, the Housing Authority entered into a contract with developer Columbia Residential to begin the demolition of the old 54-unit site.

A row building on site is scheduled for demolition once the three remaining families living there are relocated into the new units, Sanders said.

“I think a lot of people are excited,” she said. “I’ve been hearing some really positive things. (The apartments) are absolutely beautiful.”

Sanders, who has headed up the Housing Authority since 2011, said the complex will be gated and feature an electronic fence.

However, as Sanders explained, gaining access to one of the new apartments will not be easy, as the waiting list is long. She said many residents are under the incorrect assumption the new units are public housing, but the U.S. Department of Housing and Urban Development is “getting out of the public housing business. HUD is no longer putting good money into (bad).”

The Garyville project is being funded through a $5.3 million Community Development Block Grant grant.

Sanders said HUD is moving toward the multi-family setup, and new units must be project based, which falls under the umbrella of the voucher program.

“Under this program, there are certain requirements we must adhere by,” she said. “As far as setting up criteria for this development, the intake process is stricter. The public housing did not necessarily require a credit check.

“All of that is going to be done. We want to make sure that we place the best possible stewards in those units.”

Sanders said the original number on the current tenant-based Section 8 waiting list was 4,000 families, but that has been purged to 2,000. She said letters have been sent to those families to gauge the interest of moving into Garyville.

Sanders told Council members there are 240 public housing units throughout the parish waiting on funding to be demolished. She said the Housing Authority recently demolished 20 units at a cost of $200,000. The agency receives funding from HUD, and Sanders noted St. John Housing Authority is a rural agency competing for tax credits and other funding with much larger agencies.

Sanders said HUD must sign off on every demolition project, and that one of those projects includes Edgard. She acknowledged a new development in that area seems unlikely noting there is a concern about the viability of the community.

Regarding maintenance of the area that will be vacant once final demolition is completed in Garyville, Sanders admitted she “will have to come back to the table with ya’ll and try to see how the (parish) and federal government can work together to maintain that.”

Sanders did say her agency is discussing procuring a new development partner for funding and that another funding source might be found in selling the Housing Authority’s housing sites once demolition is completed.

But until then, “funding from HUD is all that we have at this point,” she said.

NEW ORLEANS – Shallon Dunmiles, 35, worked as a receptionist and sole employee of a LaPlace pediatrician in 2017. It... read more