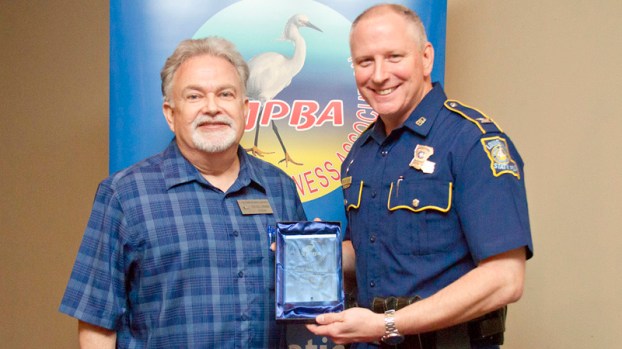 LAPLACE — While no one is happy to see the flashing lights of a state trooper, Louisiana State Police augment local law enforcement to provide a number of public safety services to St. John the Baptist Parish residents.

Reeves detailed the importance of Louisiana State Police’s relationship with the St. John Parish Sheriff’s Office in solving crimes with DNA testing and using technology for residential and school safety.

“We have to stay vigilant in making sure we provide the best protection for our kids,” Reeves said, adding prevention is paramount.

“One program we’re looking at is a preemptive anonymous reporting program,” he said. “If you’re a parent, a student, a teacher or a friend and there’s something suspicious about someone who made an offhand comment, you can anonymously contact this app by phone, computer or text message and allow us to check into it through the local authorities.”

The next program under consideration would notify the nearest law enforcement officers within a five-mile radius in case of emergency at a local school, Reeves said.

“These apps would prevent us from having to go through dispatch,” Reeves said.

According to Reeves, a suicide threat posted to Facebook in fall 2018 allowed Louisiana State Police to alert local authorities and save the life of a New Orleans man.

Louisiana State Police used DNA testing in 1,278 violent crimes in 2018, which included several cases where a weapon used in one crime helped solve others.

“It involves an effective exchange of information between local, state and federal law enforcement agencies,” Reeves said. “It’s an honor to work with the Sheriff’s Office here. We have a great working relationship with Sheriff (Mike) Tregre and his deputies. Our troop manager tells me that the relationship has never been closer.”

The biggest challenges Louisiana State Police face on a day-to-day basis are high-speed distracted driving and combatting the opioid crisis, according to Reeves.