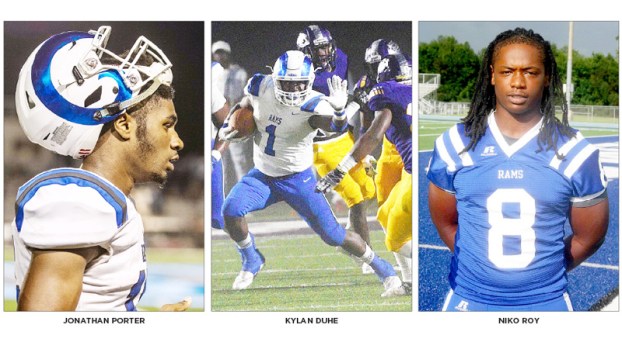 EDGARD — Three of West St. John High School’s most talented football players are packing their bags for Kansas junior colleges, eager to put in the work to be re-recruited by Division 1 programs.

Kylan Duhe and Niko Roy are signing to Highland Community College with plans to make their marks at running back and transfer when their next opportunities arise.

Duhe, the son of Kellie Duhe of Garyville, built a legacy at West St. John as an offensive MVP with first team all district, all metro and all state designations. Hungry for the next level of competition, Duhe said he’ll never forget running the field in the state championship or scoring seven touchdowns in a single game.

“West St. John prepared me well,” Duhe said. “I talked to the coach at Highland, and it seems like it’s a good school. I went to do some research on campus. As of now, it’s my best option to do some work up there, graduate, then transfer to a D1 school.”

Duhe plans to major in business as a career path, though his first dream is to join the league of running back Le’Veon Bell and other NFL icons.

Niko Roy, the son of Wail Williams and Latoya Davis, also has NFL dreams and an affinity for business.

Roy plans to study sports administration at Highland Community College, and he imagines himself owning a football program in the future. His first order of business is to transfer to a competitive D1 school and, if possible, earn a spot in the NFL.

Roy also excels in baseball and maintained the highest batting average on his team in 2018, but his future lies in football, a sport he’s played for more than 10 years.

“I’m a hardworking football player ready to get it started,” Roy said. “It was a great opportunity playing here at West St. John. They work you hard every summer. That’s how you know you will be ready for college.”

Rams coach Brandon Walters said Roy and Duhe have done an admirable job carrying the torch for West St. John, adding the school has a tradition of powerful running backs.

“Each of them brings a different aspect to the game that is uniquely theirs,” Walters said. “Niko Roy is a big, strong power runner. Defensively, he’s just a terror on the field. He knows where to go; he knows where to be. He arrives and punishes people when he gets there.”

Walters described Duhe was one of the leading rushers in the state and one of the most talented kids he’s coached.

Also projected to succeed at the next level is Jonathan Porter, a USA all-American defensive end and outside linebacker signing to Dodge City Community College in Kansas.

“I think the sky is the limit for him. He’s long, he’s ranging and he has a great motor. Those two colleges are basically getting a steal. These three guys are some really top tier players who may have gotten overlooked, but we just encourage them to utilize this opportunity and make the best of it for themselves.”

That’s exactly what Porter plans to do in the outside linebacker position in college.

Porter collected 96 tackles and numerous sacks during his senior season with the Rams, but he yearns to play football on a larger scale. He sees himself on an SEC team, enveloped by cheering crowds in packed stadiums.

“Going to a JuCo is the best bang for my buck because I will be able to get re-recruited,” Porter said. “I had coaches who have played college football and know what it takes to be great in college football. I think it prepared me for the next level.”

Porter, the son of Nia Mitchell and Darrius Scott, plans to study chemical or mechanical engineering and minor in business to follow in the footsteps of successful family members.