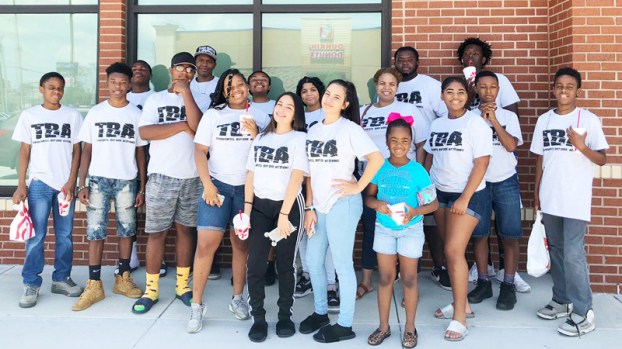 Thoughts Before Actions members grab some Chick-fil-A after a Shifted session and bowling.

LAPLACE — Denarold Anderson learned the sky is the limit to a successful future in his elementary school days, with support from “Save Our Youth” events organized by his mother, Judge Madeline Jasmine, and Division A of the 40th Judicial Court.

The memories were long lasting for Anderson, now in his 30s and an educator at John L. Ory Communication Arts Magnet School. Recognizing today’s generation of students face a unique set of challenges, Anderson promotes positive life choices through his non-profit, Thoughts Before Actions.

Thoughts Before Actions is reviving Save Our Youth Day for children ages 12 and up with an inaugural celebration from 10 a.m. to 3 p.m. April 6 at the New Wine Christian Fellowship gym.

Doors to the cost-free public event open at 9 a.m., and parents are invited to attend.

Breakout sessions on bullying, suicide and mental health, teen pregnancy and more are balanced with entertainment, according to Anderson, who also coaches at West St. John High.

Save Our Youth Day also features food, games, a performance by DEE-1, a rock wall, a selfie station and quality door prizes including laptops, TVs, gift cards and Beats by Dre.

“We’re giving them a full day of education, as well as entertainment,” Anderson said. “This day is all about being positive. There’s a lot of negative in the world that’s always reported, and I’m letting them know there are still positive outlets out there.”

Anderson reached out to the three guest speakers after hearing them speak at various community events.

“All three are people I believe can reach youth with their stories,” Anderson said.

Thoughts Before Actions members enjoy a dinner outing without technology.

Kearston Poche, one of Anderson’s lifelong friends, is thrilled to see Save Our Youth open to local youth.

“It’s important to me seeing my best friend’s vision come to fruition,” Poche said. “Seeing his commitment to this event and others that he has had inspires me to be a continual support for his mission. I believe the teens and tweens who attend will benefit educationally and socially due to the activities that we have planned for that day.”

Held bi-weekly over the summer on the East Bank and West Bank, Shifted introduces youth to guest speakers and builds life skills in stress management, decision-making and standing up to peer pressure.

Awan Lewis, Alan Burl and Paris Cash pose with a homeless man during a feed the homeless service event.

“I enjoy talking to my friends in the group and mentoring the little kids to do the right thing,” Becnel said, adding the ages of participants range from about 10 to 19. “It gets kids more active and helps them socialize with each other.”

“Mr. Anderson is a great guy for sure,” Becnel said.

“What he’s doing is great, and I want to thank him for it. I hope he continues to do this.”

Since forming Thoughts Before Actions in 2016, Anderson has also worked with third through eighth graders in St. John the Baptist and St. James Parish schools.

“We try to empower the youth to do just as our name implies, think before you act,” Anderson said. “A lot of things the kids do these days are not because they are bad kids. They’re just not thinking at the time. We get them to think, ‘I can be doing positive things.’”

EDGARD — A LaPlace man is expected to spend the rest of his life in jail for the brutal killing... read more