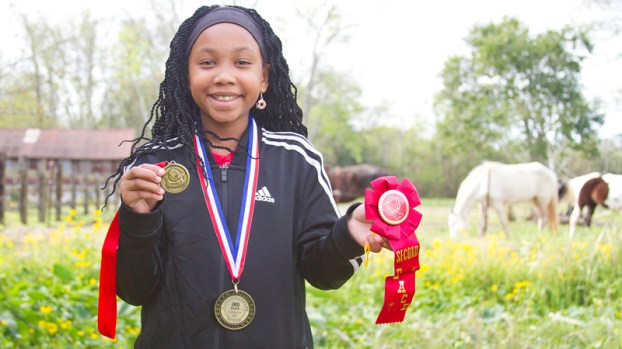 Fourth grader Cali White of LaPlace Elementary displays the ribbon and medals she won this year while presenting her award-winning social studies project on the impact of bullying.

LAPLACE — Quick-witted fourth grader Cali White is wise beyond her years, both in classroom learning at LaPlace Elementary School and in her ability to give advice to friends in need.

Cali was the only child from her school to advance to state level social studies fair competition this month at McNeese State University, where she won third place for her project on the impact of bullying.

Presenting to the judges was nerve-wracking at first, according to Cali.

“It was kind of frightening, but then I thought that if I could get this far, I know I could do it,” Cali said. “I believed in myself, and I pretty much did it. I feel great that I got to this level.”

Cali instills self-confidence into those around her, and she wants peers to know “hard work and dedication can get you anywhere you believe.”

“I recently lost my dad, and she helps me deal with a lot,” Griffith said. “She’s not the typical 10-year-old. She knows the comforting words and when to say the right stuff. She’s my special child.”

On top of her encouragement, Cali stands apart in her ability to learn quickly.

Math and social studies are her favorite subjects because both come naturally to her, and she’s maintained honor roll every quarter since kindergarten.

“She’s good for a challenge,” Griffith said. “One way or another, she’s going to get it right. She never ceases to amaze me.”

Cali makes good behavior a habit, believing the most successful students are those who give teachers the least amount of grief. While cooperative, Cali is far from a wallflower that blends into the background.

With ambitions to become a lawyer and operate a cosmetology business when she’s older, Cali said she isn’t afraid for her voice to be heard.

“I think that I should be a lawyer because there are so many people in the world that want to get out of jail, but the lawyer sometimes can’t help them,” Cali said. “I want to be the lawyer who can be fair and give my opinion. I put my opinions out there.”

Cali plans to work as a cosmetologist “on her lawyer breaks” because she has always immensely enjoyed hair, makeup and manicures.

They’ll often hear her going over lesson plans, even when the only audience members are the stuffed animals in her room.

“Before I become a lawyer, I would have a goal to be a teacher because I really like to teach,” Cali said.

Cali represented LaPlace Elementary this year at the District spelling bee, and she is an active member of her school’s 4-H Club.

Most school activities are geared toward middle schoolers, according to Cali, who said she plans to join her school’s basketball and track teams next year.