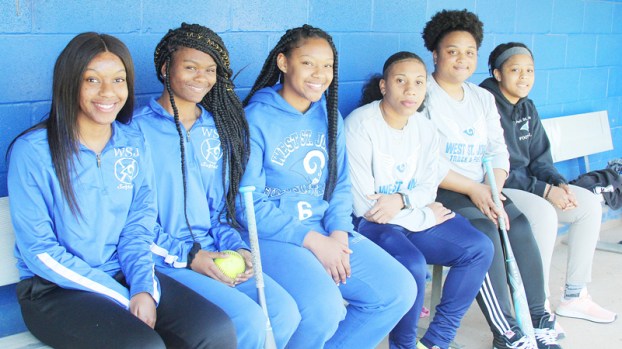 EDGARD — Rainy days and inexperience put a damper on the first half of West St. John High School’s softball season.

Coaches say this year’s squad is tasked with building the program from square one.

Pitching is the team’s greatest challenge, according to head coach Kenneth Streeter. When senior Shiaa Thomas, last year’s go-to pitcher, graduated early in December, her absence left a void within the team.

Game cancellations for stormy weather called for a delayed season start and a packed schedule as sophomore Kyli Vontoure stepped in as the Lady Rams’ sole pitcher.

Vontoure excelled during Monday’s game against White Castle and threw 10 strikeouts over seven innings. By Tuesday, however, her arm tired out, and there was no one to replace her on the mound against St. Martin’s Episcopal before the game ended in a 0-15 loss.

“It’s a lot of pressure to put on one person,” Streeter said. “You can’t pitch one pitcher for four games in one week. She did great on Monday, and that goes to show you what type of pitcher she is when we’re not leaning on her too hard.”

Streeter and the assistant coaching staff are training other players as back-up pitchers. Junior Tierny Sterling got in some practice time throwing Wednesday afternoon, though there’s still a long road of development ahead.

Hitting has been up and down, with some strength coming from returning players Amiya Lumar, Jarae Jackson, Tiye Walters and Vontoure.

“We had high hopes for this year, but things changed, and with change came reassessment of our program,” Streeter said. “We’re in the midst of getting the program back together during the season.”

“Jazmen is the leader of our team,” Jack said. “She’s always at practice on time. She controls the exercise. She’s keeping kids informed on what’s going on, and she stays on top of them as far as getting proper exercise and stretching.”

Moving forward, Streeter is focused on getting the seven eighth and ninth graders on the team accustomed to the game.

“When they get in games, some of the younger players are nervous,” Streeter said. “We’re trying to get the girls on the same page, playing together. It’s been trying at times, but we’re getting there.”