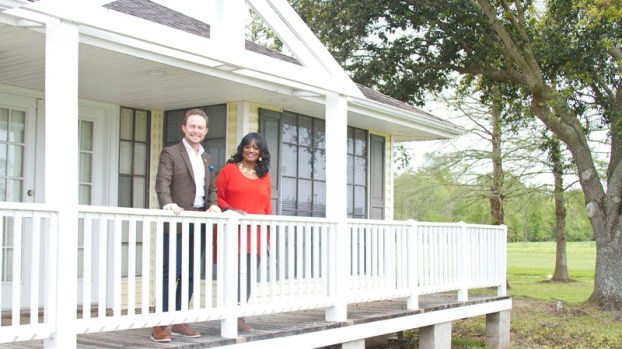 Buddy Boe and Peggy Joseph, seen at their new location on 671 Belle Terre Blvd., are part of the leadership at River Parishes Tourist Commission, which continues to expand its scope.

The visitor center would complement welcome centers in St. James and St. Charles parishes to greet guests traveling into the River Region from Interstate 10 in a centralized location.

The move to 671 Belle Terre, which will be finalized next week, secures office space for four full-time employees. The picturesque yellow cottage will serve as the front door for tourists until a visitor center is constructed less than a mile away.

The move to new office space on Belle Terre brings River Parishes Tourist Commission one step closer to an all-important visitor center to be constructed close to the Interstate.

He said the relocation is part of an ongoing effort to tell a complete story of River Parishes culture that will, in turn, benefit locals with tax revenue generated through tourism.

Historic Riverlands in Reserve is one attraction highlighted by the River Parishes Tourist Commission.

Rita Perrilloux, co-owner of Historic Riverlands in Reserve, said the Tourist Commission has evolved from a plantation focus to a web of stories connecting all facets of life along the river.

There was a time when Perrilloux felt unwelcome within the Tourist Commission’s “New Orleans Plantation Country” brand as an attraction that promoted African American history post-slavery.

“Now, it’s a different season,” Perrilloux said. “They’re welcoming inclusion and diversity. There are so many other stories besides the story that has been told in this area that are now being included. I am endorsing where it is going, and it’s a whole lot better than where it was.”

Since 2012, Perrilloux has seen more elected officials and stakeholders representing attractions other than plantations at meetings.

“Even those inside the plantations are evolving,” Perrilloux said. “Now, they are putting a name to the people who lived and worked on the plantation beyond just the plantation owners. The stories we’re adding do not take away from what they’re doing. It enriches it.”

The River Region Christmas tradition of lighting bonfires on the levee is featured in a River Reel video series.

Past St. John Parish Council discussion and a survey of millennial tourists raised questions over whether the Plantation Country brand evoked negative images of racism, slavery and brutality.

According to Boe, the ugly history is part of a bigger story, one that still commands attention around the globe.

“The complex history is what brings people here,” Boe said. “Visitors of all income levels, all shades and ages are intrigued by, for different reasons, those stories on plantation grounds. That contrast, the horror and beauty that exists at the same time within these properties, intrigues people from around the world.”

The brand geographically places the River Parishes near New Orleans attractions, while an “Out Here” campaign highlights what makes the region unique.

Boe plans to continue the Tourist Commission’s relationship with the St. John Community Center, especially in regards to renting it out for events such as weddings, carnival balls, motorcycle shows and seminars.

The Community Center is the link to the growing film industry, according to Boe.

“We want to make it easy for the film industry to fully invest in the community by making it easy for them to use local businesses,” Boe said. “We want to train our people to be performers, extras and support staff in film productions.”