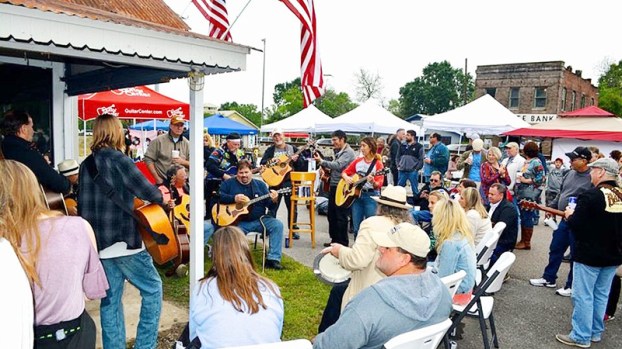 GARYVILLE — Sings & Strings Jam Fest transforms Garyville’s historic buildings into sites of camaraderie where musicians ages 5 to 95 gather, instruments in hand, to learn from each other without fear of judgment.

The festival has jubilantly celebrated music, the arts and historic preservation of the Garyville Timbermill Museum since 2014, and organizer Peyton Falgoust said Sings & Strings has an expanding focus on community goodwill.

This year’s Sings & Strings Jam Fest will be held from 11 a.m. to 8 p.m. April 7 on the grounds of the Timbermill Museum and surrounding historic structures, and 100 percent of proceeds from a lunchtime cook-off will be donated to a local child’s battle against cancer.

Maddox Louque, 9, of Lutcher was diagnosed with kidney cancer in 2016 when doctors identified a stage 4 Wilms tumor. Maddox endured chemotherapy and radiation for 20 months of remission before his cancer returned in 2018.

Looking at Maddox, Falgoust is reminded of his young nephews. He sees Sings & Strings as an ideal outlet to help an innocent community member in need.

“This is our sixth year, and Sings & Strings is growing every year and becoming more of a platform for us to help someone in the community in need,” Falgoust said. “We have this platform that brings people together, and we want to utilize that to help other people in the area, not just the museum. This is a good step in that direction.”

Sings & Strings attendees can support Maddox by purchasing $10 entrée samplers or $6 single bowls during the cook-off from 10:30 a.m. to 1 p.m. April 7.

Organizer Tiffanie Poche said there’s no fee to enter the competition, which features awards for soup, appetizer and gumbo; seafood and meat categories. Food must be prepared the day of the event, and set up can start as early as 6 a.m.

Sings & Strings also features a 5K run, numerous craft vendors and open jam areas with music of all genres, from bluegrass to bands that rock the LSU college scene in Tigerland.

General admission to Sings & Strings is $5, while children under 12 and musicians get in free. Musicians also have access to a hospitality room with refreshments.

Sings & Strings has attracted hundreds of musicians locally and from out-of-state, and Falgoust said it’s a learning experience for all ages and experience levels.

“There are people that might only know a few chords,” Falgoust said. “I don’t want anybody to feel out of place or intimidated. It’s one of the most welcoming music environments I’ve ever been a part of. Nobody is ever an odd man out.”

“Peyton loves to share that passion with children to help them realize you can love what you love, and you can do great things with it if you have a passion,” Donna Falgoust said. “Not a lot of people have a passion. A lot of people like a lot of things, but Peyton has a true passion for spreading music.”

She said that passion extends to the Garyville Timbermill Museum, which has received more than $60,000 in insurance and structural and aesthetic renovations from nonprofit Sings & Strings proceeds since 2014.

According to Falgoust, the next steps are to replace beams on the Western wall, replace the fence surrounding the property, revamp surrounding landscaping and construct a parking lot.

Louisiana gas prices continue to rise. Check out how much.

LAPLACE — Louisiana gas prices have risen 7.6 cents per gallon in the past week, averaging $2.32/g today, according to... read more