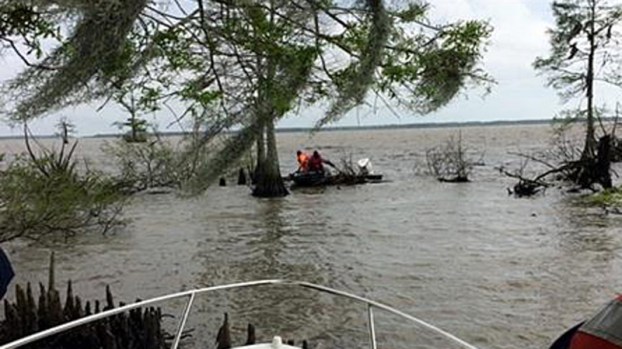 “It was the weather conditions,” St. John Sheriff’s Office Lt. Charles Wale. “We had some high winds that came up, and they were on two 15-foot flatboats that weren’t capable of handling the conditions in the water.”

“It was kind of one of those embarrassing situations for the poor guys,” Wale said. “No citations were issued. It was just a mistake on their part. Thankfully, we were able to get out there and help.”

Utilizing GPS coordinates provided by one of the men in need, the search and rescue team located the stranded boaters in a small cluster of trees in shallow water.

One boat capsized and the other was afloat but quickly taking on water.

“It was about waist deep water,” Wale said. “It wasn’t terrible, but there were a lot of stumps there. Because of the type of rescue boat we had and because of the weather, the guys had to get out in the water and help them get over to our boat. There were no injuries. It was just one of those things that actually happens more frequently than you would think.”

Rome and Norsworthy entered the water and navigated the area by foot. All boaters appeared to be in good health and refused medical treatment.

With spring approaching and activity increasing on the parish’s waterways, the SJSO is asking the public to always wear life jackets or personal flotation devices while on the water.

“I’d say probably three or four times a season, we end with someone misjudging what their boat is capable of and what the weather conditions are,” Wale said.