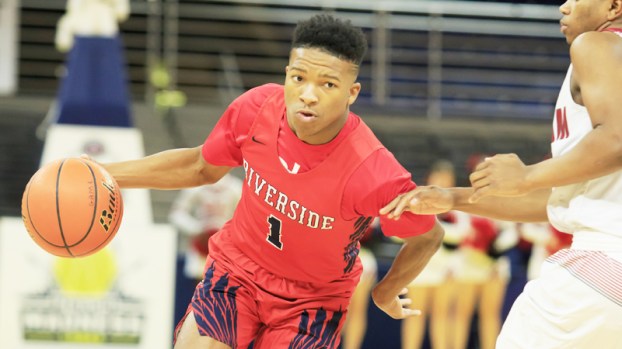 RESERVE — When Riverside Academy lost to University Lab by 10 points on Jan. 18, it dropped the Rebels’ record to an uncharacteristic 6-12.

Riverside was playing “hero ball,” according to coaches, with players showing nowhere near the trust in their teammates to produce a winning result.

Coach Timmy Byrd said RA’s default style was marked by one player or another always trying to be “the guy” while not relying on teammates for winning plays.

If something didn’t change, Riverside was in for a dreadful result.

Walker joined the program this season, providing valuable minutes in the starting lineup. Bigham and Foley were known quantities around their Reserve campus and teammates. Having spent years in the program, they grew from supporting players on superb teams to starring players for the 2018-19 Rebels.

Bigham, Foley and Walker decided the Rebels would no longer play hero ball. They were going to start playing unselfishly and demanding their teammates do the same.

“We went from being a selfish team early in the season, where one guy is always trying to be the guy that causes us to win, to finally trusting the system, coaches and our teammates,” Byrd said. “They started really sharing the basketball and playing hard for each other. That is how the season got turned around.”

Riverside closed the regular season as winners of eight of its last ten games, a strong run that led to a first round bye and two lopsided victories in the Division III Allstate Sugar Bowl/LHSAA Boys Basketball tournament.

Bigham, Foley and Walker provided veteran leadership, underclassman Gage Larvadain blossomed into the team’s leading scorer and De’Juan Daniels emerged as a fifth starter over the last five weeks, one who produced six straight games of 20 or more points and better than 10 rebounds.

“This uniform means a lot to us,” Foley told nola.com. “Coach Timmy has built something special with this name across our chest. He taught me how to grow up as a man, and that meant a lot to me.”

Postseason victories over The Church Academy and Holy Savior Menard set up the Rebels for a Wednesday morning semifinal showdown with defending state champion The Dunham School.

The game started in RA’s favor with Bigham and Foley driving to the basket and getting Tigers 6-foot-6 star senior Jordan Wright in early foul trouble.

Riverside was holding onto a one-point lead late in the first quarter when, arguably, the game’s most important sequence took place.

The Rebels were whistled for three straight fouls, all calls that Byrd disagreed with, when Tigers bench player Ty Spurlock came in and caught fire.

According to Byrd, Rebels coaches scouted five Dunham game tapes from beginning to end. In total, Riverside had seen Spurlock make two 3-pointers over that stretch.

Spurlock shared with reporters he was struggling from the 3-point line for the last couple of months. Still, he was told to believe his shots would go in every time. On Wednesday, they did, well almost.

Spurlock connected on 8 of 12 shots from the field, including 5 of 7 from 3-point range en route to scoring a game-high 25 points.

Byrd said he thought the referees were initially calling the game real tight, which the Rebels adjusted to, before failing to adjust again when the referees stopped calling it tight.

“It kind of put us in a bind,” Byrd said. “We were in foul trouble. It took Gage Larvadain out of his game.

“We weren’t playing (Spurlock) for the 3. He got some wide-open looks and was just deadly. Within about 30 seconds we went from being up 1 to down 7 and then, because we were in foul trouble, it snowballed from there.”

Riverside ended the first quarter trailing 20-13 and went into halftime down 41-26. It was a deficit the Rebels could not rebound from.

Larvadain fouled out with 8 points in 19 minutes, scoring 11 below his season average.

Foley led the Rebels with 17 points, while Bigham scored 16 and Walker scored 7.

“You always hope your best players play their best games at the end of the season,” Byrd said. “I thought Kash (Foley) and Isaiah (Bigham) did that. We got great effort from all three of our seniors. They provided leadership and righted the ship a month and a half ago, and we got on a roll and really did some good things.

“I’m at peace with the loss, because my kids gave everything they had. Our seniors were extremely focused and did everything they could possibly do to put us in a position to win that game. We just didn’t get enough from the rest of our team to overcome some of the pitfalls that we encountered.”

Byrd says he has watched Foley and Bigham grow and become really good players — “on top of that, they are just outstanding young men.”

The veteran duo, along with Walker, will be missed greatly by coaches but plenty of talent remains.

Starters Daniels and Larvadain come back next season, and the Rebels have others who played a lot of minutes off the bench.

Byrd said Riverside also has a talented group of eighth graders who are about to emerge on the prep scene.

“We like where we are at; we like what we have returning,” Byrd said. “We’re obviously going to miss our three seniors, but you have to be able to overcome that every year. We’ve got some really good players coming back next year.”

Rebels aiming for championship return – RA squares off with No. 1 seed Dunham in semis

LAKE CHARLES — This week’s deciding game against top-seeded Dunham will either fuel the Riverside Academy’s valiant return to the... read more