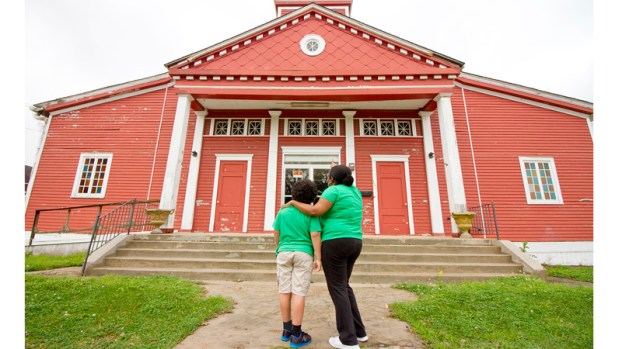 Courtni B. Waguespack, cofounder of The German Coast Preservation Guild, explains some of the history behind the site of the old St. Joan of Arc Catholic Church in LaPlace, which is where the guild will host a fundraiser this weekend.

LAPLACE — Preservation keeps the River Region’s history alive, safe from falling through the cracks as untold accounts of passing generations.

The German Coast Preservation Guild, founded in 2018 by a two-woman team, plans to document the stories of our region’s elders through video and audio recording.

Organizer Courtni B. Waguespack said past generations are key to identifying old businesses that now lay dilapidated on the sides of roadways, as well as passing down stories of forgotten individuals who shaped the River Parishes into what exists today.

To help defray costs for audio recording equipment, the community is invited to a Gospel & Gumbo fundraiser from 5 to 6:30 p.m. Saturday at the old St. Joan of Arc Catholic Church, located at 181 W. Fifth Street in LaPlace.

A $15 donation opens the door to a bowl of gumbo, a side, a drink, dessert and live entertainment from local musicians including Nathan Joseph, assistant minister of music for Destiny Christian Center in LaPlace.

Waguespack said all donations are tax-deductible because German Coast Preservation Guild is a 501c3 nonprofit organization.

She anticipates three or four live performers at the event, which features various types of gumbo from chicken and Andouille to okra and seafood. Additional snacks and extra servings will be available for sale.

“It’s about bringing awareness to this historical space and our organization,” Waguespack said.

“Right now, our biggest project is oral history, so that’s what this fundraiser is helping with. We’ve recorded a couple of oral histories on our cell phones, but funds from this benefit can help us buy a better video camera and equipment.”

“We are definitely trying to get the older generation’s stories, especially of those who are in their 90s or close to 100,” Waguespack said. “River Parish culture is a lot different from culture in New Orleans; Lafayette; Baton Rouge. I always want to protect our people and our history. I don’t want anyone to rewrite our story.”

Since forming the group last year, Waguespack and her friend Renee Donnell have sparked conversation by posting photos of aging, unidentified or historic spaces to social media platforms.

A photo of the old Mr. Cliff’s Drug Store in Edgard prompted a lot of discussion among community members reminiscing on childhood memories.

According to Waguespack, the most surprising experience thus far was a trip to the small community of Welcome in St. James Parish.

Guided by local photographer Malik Baloney, Waguespack and Donnell discovered a hotel where African American entertainers would sing and perform during the era of segregation.

A photo posted of the old Mr. Cliff’s Drug Store in Edgard prompted a lot of discussion among community members reminiscing on childhood memories.

The duo also researched a nearby community called “Free Town,” named for the formerly enslaved individuals who settled there after the Civil War.

According to Donnell, the old St. Joan of Arc church hosting the Gospel & Gumbo fundraiser has historical significance as the first Catholic church constructed in LaPlace.

“Our goal is to hold on to all of the history still present along the German Coast,” Donnell said. “It’s not just about the physical buildings. It’s about people who can speak a language that’s dying out, recipes and knowing which stores used to be here.”

A German Coast Preservation Guild music festival fundraiser planned for July is expected to incorporate vendors and musical styles unique to the region.

Donnell said an eventual goal with more funding would be to purchase historic sites for restoration.

RESERVE — A local man is behind bars after authorities say he jumped from a moving car that eventually struck... read more