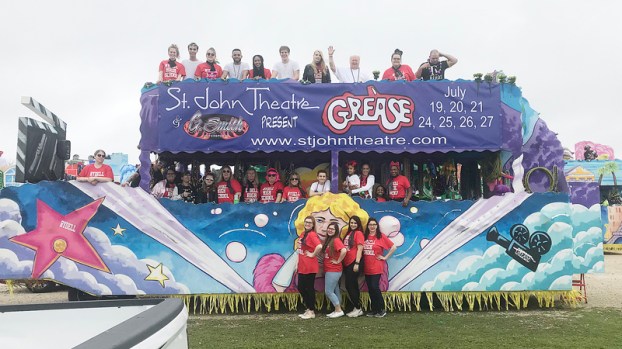 St. John Theatre entered the Krewe Du Monde parade route for the first time this year with a “Grease” float.

Banners advertising “Grease” and title sponsor GSmith Motorsports hung on all sides of the float, as riders clad in red Rydell High School shirts and scarves reminiscent of the 1950s greeted the community with excitement.

“We were trying to think of ways to get the word out about our summer show, and we thought having a float would be a great way to advertise,” Faucheux said.

“We were expecting the worst with the weather, but the crowd was so much more than what I thought it would be. The sun even came out for a little piece of it.”

Several stopped to compliment the float before and after the parade, according to Faucheux.

Director Mike Brooks said the last time “Grease” was featured as the summer musical was in 1996 with a different generation of performers, though the impact of the much loved musical remains the same.

“I think it’s an opportunity for the community to get involved in a great show, and it will interest teenagers as well as older adults because of the music some of them may have grown up with,” Brooks said. “It’s something everybody can identify with.”

Brooks is looking to fill 17 principal parts to be played primarily by older teenagers. Younger teens ages 13 and up may audition for a larger ensemble group, and there are two adult roles open for schoolteacher Ms. Lynch and radio personality Vince Fontaine.

“We are very excited because the music in Grease is awesome,” Faucheux said.

“It’s going to be a fun summer, and we want everybody to come out and join our big family.”