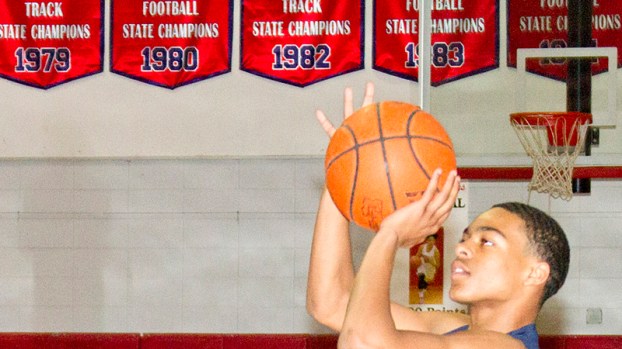 Gage Larvadain lines up a jumper during practice in Reserve. The Riverside Academy sophomore scored a team-high 21 points Friday.

Rebels aiming for championship return – RA squares off with No. 1 seed Dunham in semis

The No. 4 Rebels compete at 11:30 a.m.Wednesday at Burton Coliseum in Lake Charles. If successful against Dunham, Riverside Academy will play for the Division III championship title at 10 a.m. Saturday against the winner of today’s game between Episcopal and Metairie Park Country Day.

Country Day and Episcopal outmatched the Rebels in the semifinals in 2017 and 2018, respectively, but Dunham has proved an even more powerful contender in 2019 with regular season wins against both leading teams.

While the Dunham Tigers haven’t faced the Rebels this season, Riverside Academy coach Timmy Byrd said his team is familiar with the opposition’s style of play.

“We’re going to have to play really, really well and do a good job on rebounding the ball,” Byrd said. “We have to make sure they don’t get easy baskets. They have five skilled guys that are very athletic, and they’ve got size. They’re one of the best teams in the state in any classification, so our kids are going to have to be locked in and focused.”

Byrd said the Rebels are going to see fierce competition from Tigers guard Jordan Wright, a 6’5’’ senior with an array of college offers.

Tigers combo guard Carlos Stewart, known for his athleticism and 6’6” wingspan, is another player the Rebels must control to secure a win, according to Byrd.

“They’ve got guys who can pass, dribble and shoot,” Byrd said.

“They’ve faced a lot of good teams and play with a lot of confidence. The way we’ve been playing, we like our chances.”

Heading into the playoffs, Byrd told L’OBSERVATEUR Riverside Academy was “firing on all cylinders” in the postseason after months of continuous buildup.

The Rebels slid into the regional round with a bi-district bye and a 101-42 win over The Church Academy on Feb. 25.

Offense and defense ran strong for three quarters during Friday’s quarterfinal game against No. 5 seed Holy Savior Menard, ending in a 67-51 victory for the Rebels.

Though short in stature, Larvadain has been a key player who recently returned to full strength from a back injury.