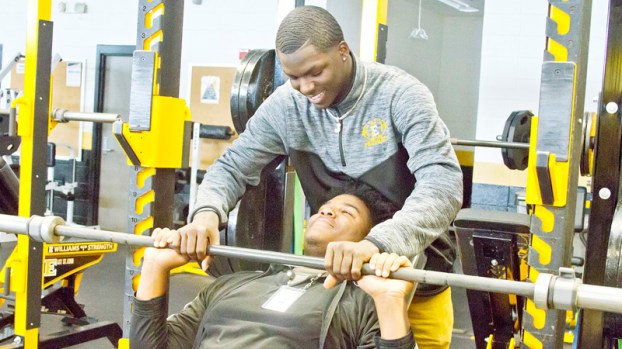 Jarius left a mark on the Wildcats program by pushing his personal limits at receiver, safety, cornerback and tight end over the course of his four-year career.

Next season, Jarius is taking his talents to the Nicholls State University football team, where he will continue his quest to be the greatest.

Coach Brandon Brown only had the opportunity to coach Hoxie and Jarius for a single season, but he said the duo’s impact on the program has been great.

“I missed their first three years; however, I’m blessed to have had a chance to coach both those guys,” Brown said. “They showed a lot of leadership and maturity during the time I had with them. They helped me in that transition of becoming coach here for the first year.”

Brown said Jarius is known for his larger-than-life personality and spirit.

“He considers himself as what some people would describe as the G.O.A.T. or greatest of all time,” Brown said. “One of his goals before leaving East St. John was to be one of the greatest, and he showed that every day in his work ethic, his attitude and his approach to the game.”

Nicholls is getting a steal, according to Brown, who said the Colonels would be in for a surprise when Jarius is drafted professionally.

Jarius received offers from Northwestern State University and Southeastern Louisiana University, both of which he strongly considered prior to choosing Nicholls.

According to Jarius, the final decision came down to input from his brother, Darion Monroe, mother Rashonda Martin, uncle Richard Martin and grandmother Catherine Martin.

“It was a decision me and my family came together to make,” Jarius said. “I personally liked the whole coaching staff at Nicholls, and I felt like their program has the same mentality as our program. I feel like it will been a good transition and a place I can grow, not just as a football player, but as a person.”

At Nicholls, Jarius will put his heart into defensive success on the football field as he pursues a major in business management and a minor in sports medicine.

During his senior season at East St. John, Jarius earned first team all-district and was named a top 5 all-metro finalist.

Hoxie had a similar start at age 6, when he was introduced to football on the St. John Parish Heat.

Serious with a sense of humor, Hoxie wants to make waves at tight end or half back at Hyland and be the person who makes the last great catch of a game.

Hoxie earned all-district designations with the Wildcats, where he focused mainly at tight end.

“Three weeks away from signing day, I didn’t feel like anybody was connecting to me like Hyland was,” Hoxie said. “The coach kept calling me; keeping in contact with me every day. I felt like it was a perfect fit for me to get to the next level.”

Brown sees great ability in Hoxie going forward, and he feels the high school senior is only semesters away from a big offer.

“I talk to the kids about setting themselves up and putting themselves in good situations,” Brown said. “He had himself in such a good situation academically, he was able to make some choices. He had some offers, but he thought he could earn a better offer by going to junior college first.”

Gifted in math, Hoxie plans to study accounting at Hyland.

Above all, he wants to be a “man among boys” and advance to professional play to make his mother, Shona Lee, proud.

“I just want to make her proud so she doesn’t have to work anymore,” Hoxie said. “Whatever I wanted, she got. She got $200 cleats and $120 gloves. She’s been to all my games and took off personally for me on Fridays.”