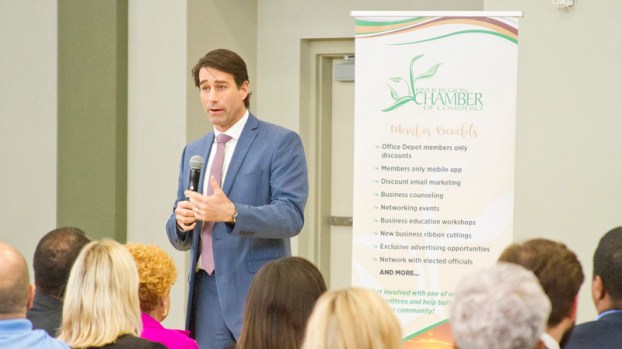 LUTCHER — Funding for the West Shore Levee Project is locked down and no longer vulnerable to reallocation.

“We appropriate the funds, but until this agreement is signed, the funds are somewhat vulnerable,” Graves said before the signing. “These funds were some of the funds potentially on the chopping block to help build a wall. We have to show we’re locking these funds in and that everyone is committed to their part of this thing.”

Graves said the contract signed Friday afternoon in Lutcher commits $760 million in federal funding announced in July to hurricane protection in the River Region and formally locks stakeholders into their obligations.

Parish presidents from St. John the Baptist, St. James and St. Charles were in attendance along with representatives from the Corps of Engineers, Coastal Protection and Restoration Authority of Louisiana and Pontchartrain Levee District.

The West Shore Levee Project is operating on a five-year timeline that includes two years of planning and three years of construction.

Construction is projected to begin in 2021 with completion by Spring 2024, according to the Corps of Engineers, signaling a delay from the late 2023 completion date announced to the public in August.

Requests for right-of-entry to property began in late 2018, and teams are working on field investigations to complete detail design maps. Real estate acquisition has not yet begun, though Graves said $42 million in upfront funding has been secured.

“We’re working hard to hold the Corps of Engineers to that timeframe as best we can,” Graves said. “The next step after locking in the formal agreement is finalizing the assigned tasks everyone will do in a certain timeframe. From there on, it’s just moving forward toward turning dirt.”

Before stopping in Lutcher Friday afternoon, Graves served as guest speaker at a luncheon hosted by the River Region Chamber of Commerce.

Graves spoke on the importance of planning for the future to avoid repeating mistakes seen in the levee project, which remained in planning limbo for more than 40 years before receiving approval in 2018. He commended the Chamber for fostering a workforce capable of meeting tomorrow’s challenges.

“For a long time in Louisiana, we took the limited resources that we had, and we probably didn’t spend it in the top priority places,” Graves said. “We found ourselves in a quandary, where we have some of the worst traffic in the United States and really incredible flood vulnerability. There are real consequences of higher flood insurance payments, lost possessions and disrupted business.”

He referred to the West Shore Levee as a project “designed for the 1970s,” adding the delay in approval created extra steps to bring design up-to-date.

“We got the supplemental funding to come in and do enhancements to reflect the 2020, 2030, 2040 conditions we need to be preparing for,” Graves said.

Hundreds were in attendance for the River Region Chamber of Commerce luncheon, held annually to swear in new board members.

Executive Director Chassity McComack said Graves reached out to her about attending the luncheon, which united leadership from St. John, St. James and St. Charles Parishes in a setting that felt “like a family reunion.”

Kim Bourgeois, 2018 Chamber Chair, reflected on progress made in the past year, which included graduating the Chamber’s first leadership class.

Upcoming plans to be overseen by 2019 Chair John Little include establishing a workforce campaign to celebrate community college and technical graduates.

“Everyone that knows what the Chamber does came out and supported,” Scott said. “We were maxed out, full to capacity, so the turnout was excellent.”

There was a strong turnout in St. Charles Parish.

BATON ROUGE — Kristal Breaux of Bayou Gauche was crowned the 2019 Louisiana Association of Fairs and Festivals queen on... read more