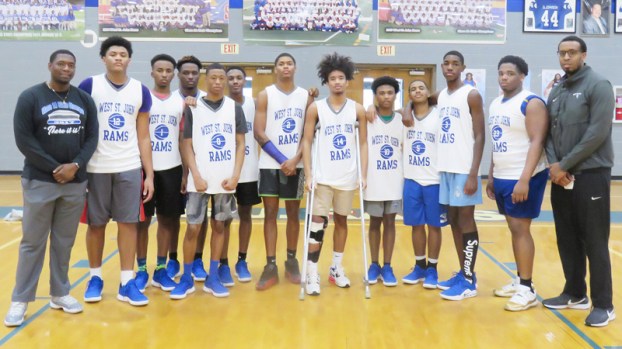 ST. GABRIEL — The West St. John Rams were supposed to be outmatched by East Iberville during Friday’s bi-district basketball playoff game, but it was anyone’s game with less than two minutes remaining in the fourth quarter.

Rams coach Alton Joseph said the record doesn’t reflect his team’s ability to adapt to unexpected changes seen throughout the season. What started as a team of 13 players dwindled to about seven as injuries sidelined experienced players, while others chose to leave the team mid-season.

Joseph is proud of the gameplay he saw against East Iberville.

“We played a real good game and executed well,” Joseph said. “It just came down to crunch time. We came out pretty solid offensively and defensively, and the first quarter ended with a tied game. At halftime, we were only down by three. I think my younger guys did a great job responding to adversity after losing a couple of key guys earlier this season.”

The Rams have grown throughout the year, and Joseph sees potential in Bartholomew, who he described as “the emcee of the court.”

“Tyray is a true point guard who really contributed to scoring when we needed him to, and he had a lot of great assists,” Joseph said.

“For him to take the game in his hands like that at a young age was really good.”

Junior Jerrod Jessie Jr. will also be key to next year’s team, which Joseph said would return bigger and better.

“I’ll get some of those guys that were injured back,” Joseph said. “I’m only losing two seniors. With all of them back, we’ll be the team to beat next season.”