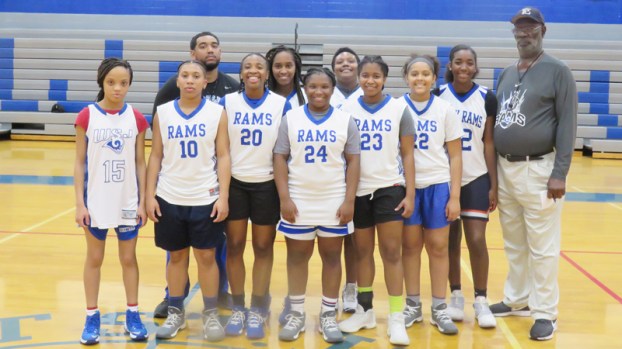 Though KIPP took an early lead in the first quarter, rising over West St. John 11-3 minutes after tipoff, the game was hard fought to the end with both teams making runs.

Head coach Lester Smith said his team expected a challenge from KIPP after the Lions ran away with a 63-27 win over West St. John earlier this season.

“We had a good game plan and we played well,” Smith said. “We turned the ball over more than what we normally want to do, but other than that, I think it was a really good game. We continued to make plays and continued to hustle to the end.”

Hamilton and Destiny Johnson, both seniors, combined for a Lady Rams comeback in the fourth quarter to tie the score at 50-50 with just less than four minutes remaining in the game.

Stevante Hamilton was a driving force for the Lady Rams.

From there, West St. John ran into foul trouble trying to secure possession while KIPP closed the game with a 10-point run.

Smith is pleased with West St. John’s 28-8 season record and the vast improvement the girls have shown since the their last game against KIPP.